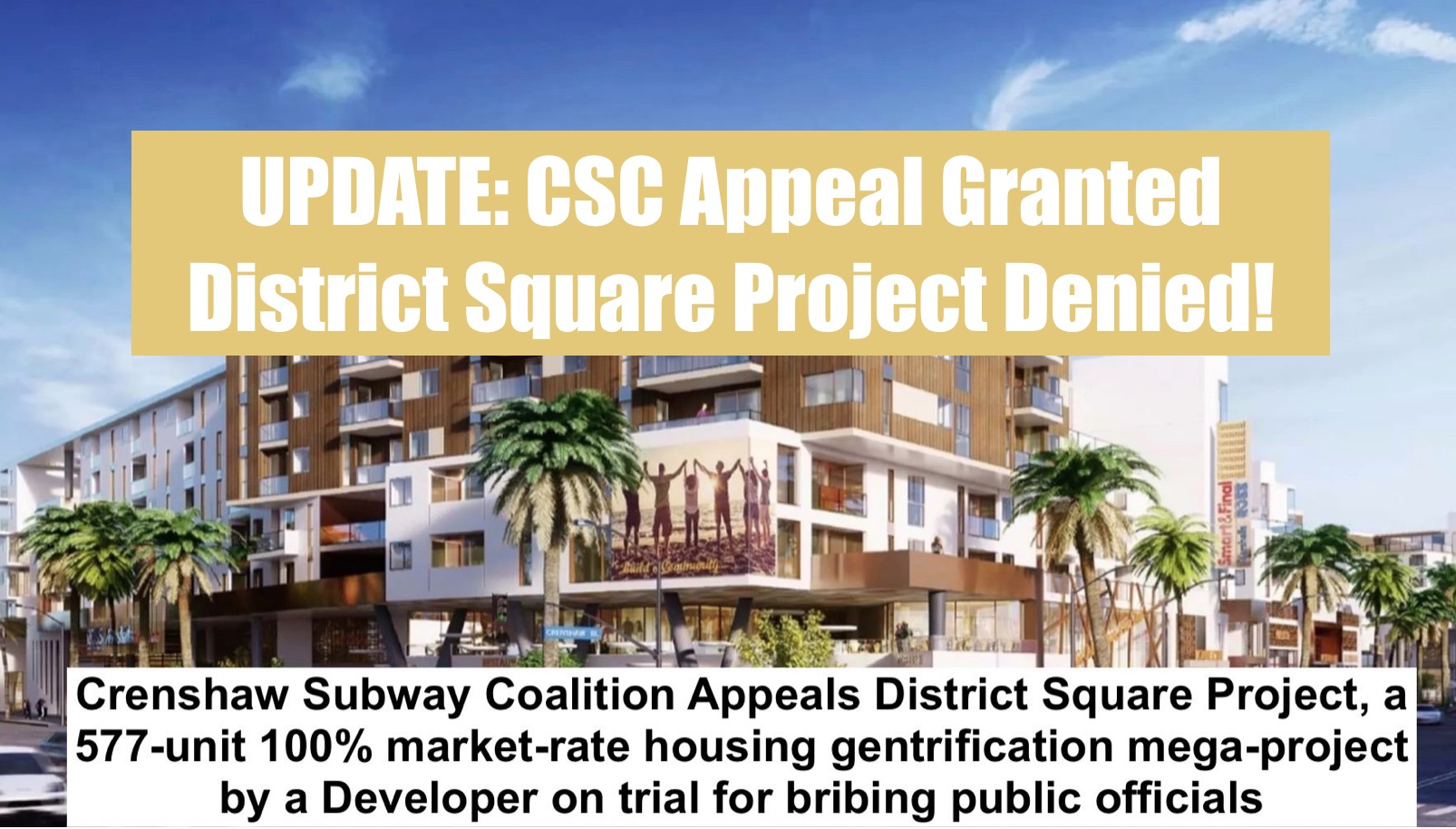 On Tuesday, November 19, 2019 at the South Los Angeles Planning Commission in a show of courage and defense for our South Central community the four commissioners (Eric Bates, Gail Willis, Antoinette Anderson & Stevie Stern) rejected the browbeating by the attorney of the corrupt and on-trial for bribery developer, Bay Area astroturf YIMBY groups, and in-the-bag-for-the-developer city staffers to vote unanimously to support our appeal and the appeal of long-time Leimert Park resident Lori Higgins to oppose the District Square project!

Help us continue doing the work to defend the community: DONATE TODAY.

We were first alerted to plans for the latest version of the District Square project at Crenshaw/Obama by the developer Arman Gabay who is currently on trial for bribing a public official through an article in the LA Times. We immediately registered objections with the City Planning Director Vince Bertoni (pdf).

The 100% market-rate 577-unit development in a community where the median household income for a family of four is under $41,000 per year clearly was not for us. And when the Bertoni's determination letter/approval was granted (which we were never notified of by the way, despite requesting we be added to the notice list) we filed our appeal (pdf). We encouraged Lori Higgins, who filed the first appeal to the previous version of the project 9 years ago to file an appeal as well. If we had not appealed, the project would have gone through with no public hearing!

The massive project had received Bertoni's approval through an expedited process with no opportunity for public discussion through an obscure state law SB 743. SB 743 was passed by the state legislature in 2013 and all of our local Black elected state legislators at the time voted for it. (More on this below)

We called our Summer of Resistance Town Halls on Gentrification and your presence convinced the representative for the area, Council President Herb Wesson, to take a strong oppose position on the project. Wesson responded remarkably with incredibly strong statements in support of our appeal and in defense of the community delivered by his deputy Albert Lord. He also introduced an anti-displacement zone citing this egregious project as the basis.

At last Tuesday's South LA Planning Commission hearing on our appeal, because of the public testimony of community leaders and the Council office, a dialogue that the developer and city staff wanted to make about technicalities became a rightful deliberation about displacement and gentrification!

No one from the community came to the microphone to oppose housing at the District Square site. All came to the microphone to oppose housing that they could not afford, a development that was to be built without hearing from the voices of our community, a development that would price out and push out our neighbors and seniors, and worsen America's worst houselessness crisis.

THE COMMUNITY WAS HEARD! The Commission granted our appeal and denied the project.

It is hard to overstate how monumental this victory is.

Through our resistance on this project and our Summer of Resistance we pushed the public debate about indirect displacement. The well-documented effects of large market-rate projects like these leading to rent hikes, which lead to eviction and homelessness, has been recognized by the South LA Area Planning Commission and at the City Council.

In just a matter of a couple of months, we have literally changed the way local elected officials and commissions evaluate these massive projects, FINALLY getting them to recognize the volumes of studies on displacement, gentrification, and the adverse impacts of large market-rate projects like District Square on low-income communities of color.

And we need your support so that we can continue doing the work: donate today.

We thank you, the commissioners and the Council President.

So What's Next at District Square?

ON DISTRICT SQUARE: Crenshaw Subway Coalition's position is the city should foreclose on District Square and bring in a community-serving nonprofit developer to work with the community to build a project that serves the needs of our community - a project that the community can afford. #SelfDetermination #OurLandOurVoice

Many of our seniors and other neighbors recently lost their homes due to predatory lending. Why should a corrupt developer who failed to perform on his government loans be allowed to keep the land at District Square?

ON SB 743 & OTHER HARMFUL PRO-GENTRIFICATION STATE LEGISLATION: We are committed to working with our state representatives to recognize their responsibility to introduce and pass bills to undo a lot of the damage from previously passed legislation, and hold the line to oppose current pro-gentrification bills like SB 50, by real estate industry puppet Sen. Scott Wiener's (D-San Francisco).