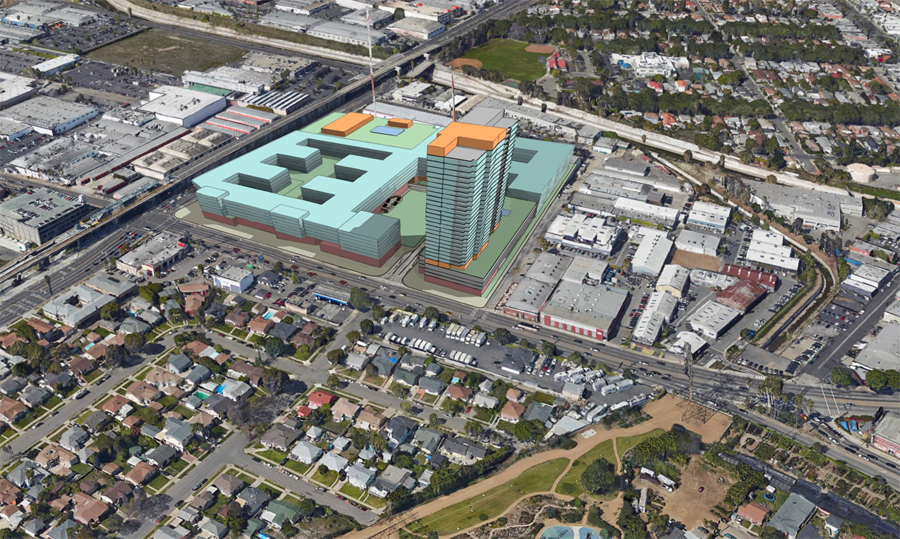 August 2016 - Anyone looking for a project that crystallizes the City of Los Angeles’ “Wild Wild West development process,” needn’t look any further than the Cumulus skyscraper at Jefferson/La Cienega. In late May, without anything that remotely approaches legal justification, and without a word of discussion, the City Council rubber-stamped a 30-story skyscraper with over 1,200 luxury housing units and 1,900,000 square feet of new development at an intersection that any commuter to/from LAX or Downtown Culver City knows is synonymous with the term “gridlock.” Crenshaw Subway Coalition, along with Friends of the Neighborhood Integrity Initiative, has jointly filed a lawsuit in Superior Court to stop the project.

The 320-foot skyscraper proposed by San Francisco-based Carmel Partners would be the first skyscraper in South Los Angeles. It is almost three times taller than the next tallest building and four-times taller than the closest building within a 2-mile radius. In fact, the tallest building in the surrounding neighborhood is only 4 stories. Views from the Baldwin Hills and Blair Hills will undoubtedly be impacted. Traffic will be worsened. It is being built without a single unit dedicated to housing for households that are “low-income,” which the state defines as a family of four making $69,450 per year. And it is being built without a local hire requirement.

The Cumulus skyscraper of luxury housing is clearly not for existing South LA residents. The project is a microcosm of how our city government is exacerbating, not solving, the country’s worst housing affordability crisis, and greasing the wheels of gentrification. It exposes a broken and corrupt process that threatens both working poor renters in Historic South Central and affluent Westside homeowners.

If you’re wondering how it is possible that the City Council approved a 320-foot skyscraper in an area where none currently exists – in an area where no one even discussed something of this size for the future, first you have to understand three terms: “zone change,” “height district change” and “General Plan amendment.”

Every parcel in Los Angeles has a list of limited uses and a height. This is justified by the presence of a citywide General Plan, which is a blueprint for development predicated on hard data related to regional and community-specific needs and growth projections. The community plan (there are 37 in Los Angeles) is where the zoning designation establishing limits on each site is specified.

To achieve approval of the 320-foot skyscraper, with 1,600,000 square feet dedicated to the luxury housing, the City Council granted Carmel Partners requests for an amendment to the zoning code in the City’s General Plan and change in the height district designation to unlimited. In Los Angeles, these General Plan Amendments, zone changes and height district changes get doled out to almost any mega-developer who requests one like mollies at a rave.

To be clear General Plan amendments are allowed – but not the kind the City is granting. General Plan amendments are supposed to be community-wide, not site specific. To change the zoning at a project site to let the developer build without having to adhere to the restrictions imposed on the whole community/corridor is known as “spot zoning.” It constitutes a special favor that increases the land value and potential profits of a development project. If that sounds like it is not only unfair, but also illegal to you, that’s because it is. It is one of multiple claims in our lawsuit to stop the project.

Unfortunately, the city of Los Angeles is littered with new high-rise luxury housing projects that received General Plan amendments, and height district/zone changes. It is how most mega-projects that are wildly out-of-character and have/threaten to gentrify communities like The Reef in Historic South Central are even possible.

There are undoubtedly regional impacts of this lone massive project. But by green-lighting the Cumulus skyscraper, our City has sent a signal to other potential developers that “anything goes” in the neighborhood. This is the domino effect of the project. It is practically guaranteed to lead to even more drastically out-of-scale developments in the community that violate zoning laws. One luxury high-rise that violates the height and density limits leads to another, then another, then another…

Unfortunately, “the domino effect” is already on full display in other parts of our city. Like a kid who says that they should get to stay up late on a school night and eat dessert first because their sibling was allowed to, mega-developers are being relieved of height, density and zoning limits based on special favors being previously given to nearby projects. You read that right: the city actually uses previous approval of illegal projects to approve more illegal projects. This is the very definition of out-of-control lawlessness that threatens our community and harms our city, and the insanity is completely unjustifiable.

Proponents of “spot zoning” argue that it is necessary to increase the city’s housing stock, because the city’s zoning code is outdated. For a variety of reasons, that argument has more holes in it than a pound of Swiss cheese. Firstly, even the low estimate is that L.A.’s existing zoning code would permit development to house 1 million more residents. That’s without General Plan amendments, height district or zoning changes. (Many suggest the figure is actually much higher: between 3-5 million.) Additionally, when one considers the density increases provided by state laws, it is apparent that almost every major commercial boulevard in Los Angeles could be lined with residential development that is a minimum of 5 or 6 stories tall.

Furthermore, proponents apparently want us to ignore that the Los Angeles City Council and Mayor have deliberately chosen to not do city planning. Much smaller cities like Seattle (population: under 700,000; which is smaller than just South LA) have far more staff solely dedicated to planning than the entire city of Los Angeles (population: 4 million). The analysis of hard data, infrastructure capacity (parks, fire stations, transportation), affordable housing and senior housing needs, and the facilitation of community conversations about improving the quality of life of existing communities while growing responsibility, is being done in LA by a skeletal staff and at a snail’s pace. Our elected officials have consistently and deliberately underfunded the “city planning” in the City Planning Department. This underfunding has gone on not for years, but for decades.

We are rightfully skeptical of Congressional Republicans who state that the oil industry must be allowed to police itself to prevent environmental catastrophes like Deepwater Horizon, because we know that for decades they’ve been cutting funding for oil rig safety inspection. A blind man can see that the real desire of Congressional Republicans is deregulation. Similarly, the real objective of the City’s elected officials should be clear: give mega-developers who feed their campaign war chests whatever they want, no matter what the zoning law requires.

HOW CAN ONE JUSTIFY “SPOT ZONING” WHEN THE CODE IS BRAND NEW?

If you are still unconvinced of the real objective of our City Council despite the approval of countless General Plan amendments for mega-developers, who spend millions of dollars in lobbying and shower City politicians with donations, the specifics regarding the Cumulus skyscraper approval process should eliminate all doubts. You see, the new zoning code for the community was before the City before Cumulus was proposed.

In April 2013, the City Planning Commission reviewed the draft of the new West Adams-Baldwin Hills-Leimert Community Plan. The West Adams Community Plan specifies the height, density and allowable land uses of every parcel in the city from roughly Robertson to the west, Venice/Pico to the north, Arlington/Van Ness to the east and the borders of Inglewood/Culver City to the south/southwest. Among other updates, drastic increases in the allowable height and density and permission of mixed-use (a combination of office/retail with housing) were proposed around the new Jefferson/La Cienega Expo Line station. The argument is that mixed-use development and higher density housing should be encouraged around transit stations.

But those proposed increases are not as great as what Carmel Partners proposed and the City Council approved. Not. Even. Close.

The proposed height increase was 45 feet to 86 feet for mixed-use projects. Not 320 feet like Cumulus.

At no point in the West Adams Community Plan update process did anyone from the public request, nor did the city planning department or any other governmental entity study, let alone recommend, anything that even remotely approaches 320 feet at the site.

And it is telling that at no point in the numerous region-wide town hall presentations and public hearings regarding the community plan update, where the planning staff justified upzoning around the La Cienega/Jefferson because of the new light rail, did a city official announce to the audience: “Oh yea, there’s a skyscraper-a-coming.”

And if you think that this is a case of the left-hand not knowing what the right-hand is doing, that somehow the Planning Department and Council just forgot about that whole community plan update process as they were fast-tracking this mega-development, consider that the City released the final (and now approved) version of the West Adams-Baldwin Hills-Leimert Community Plan on the very same day that the City Council approved the Cumulus skyscraper.

“FORGET IT JAKE, IT’S CHINATOWN”? I THINK NOT

The Cumulus skyscraper project stinks as bad as a pig farm in August. It is the poster child for a corrupt planning process that favors mega-developers who buy favors from City Council without any regard to the needs of our community and city.

Carmel Partners bought the project site knowing that the height and density at the site was going practically double, and yet that wasn’t enough. The mega-developer wanted more, because they knew they could get more, and the City Council obliged.

We in South LA, which has long been underserved by both the public and private sector, but are now receiving heightened attention because of public transit investment and a changing real estate market, must quickly rise up, become better educated and more engaged in the planning process.

We need to reject those who claim that we have to accept these illegal General Plan Amendments and zone changes, which are being requested by those who seek to gentrify our communities for their own personal profits.

We need to demand our elected officials just say no, because there is no justifiable legal basis for approving them.

We need to loudly state from the moment they are proposed that they are illegal and violations of the zoning code, and be willing to sue to stop the projects, like residents in other parts of the city, to protect and enhance the community we have built.

We should welcome new development, but unapologetically demand that it be built for us and in conformance with our community standards. To do otherwise is to co-sign our own displacement.