FACT: At 2.1 million square feet of new construction, the Crenshaw Mall redevelopment is the largest proposed development project currently being considered by the City of Los Angeles.

FACT: The developers can renovate the mall and add the proposed outdoor plaza on Stocker/Crenshaw without violating the zoning code. The mall's requested violations to the zoning code are solely sought to add the new market-rate housing units and erect a 135-foot tower, NOT to add or renovate the retail space.

WE MUST MAKE IT PLAIN: BLACK L.A. IS UNDER ATTACK

We must call the proposed development what it is: a part of a deliberate “urban cleansing” effort concocted by elitist leaders in the public and private sectors who seek to push out long-time Crenshaw residents to places like Victorville, Moreno Valley, Lancaster or on to the streets, and replace us with the more affluent (the "gentry").

We must acknowledge that the proposed Crenshaw Mall redevelopment project is an attack on the security of Black families, homes and small businesses, the preservation and cultivation of Black art and culture, the sanctity of Black space, the strength of Black institutions, and the potential of Black political power.

This is a seminal moment in the history of Black Los Angeles. 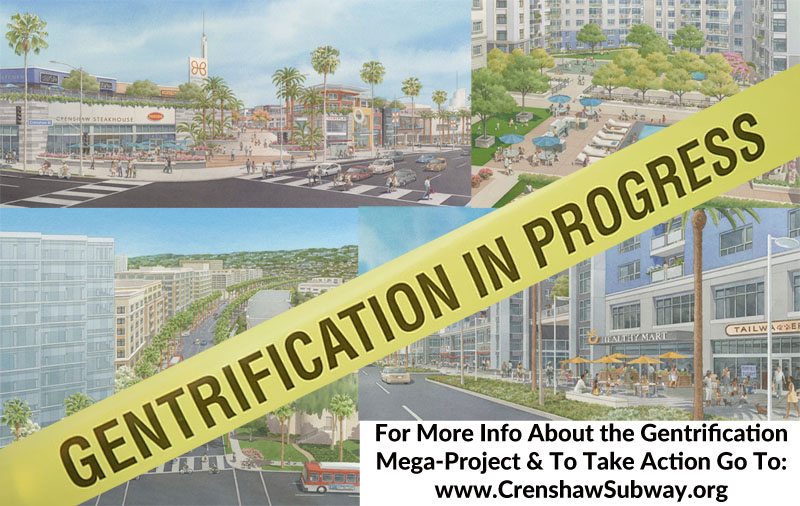 THIS IS NOT A MALL RENOVATION LIKE FOX HILLS MALL

Do not be confused by what is being requested by the Chicago-based developers.

If the out-of-town developers were ONLY requesting a renovation of the Crenshaw Mall, similar to that which was recently completed at the Fox Hills Mall, the issues would not be as intense. We would still take exception to their downright insulting community benefits agreement, which has a completely inadequate 10% local hire goal. But this is much more than just a bad deal and unlawful giveaway to a developer for yet another construction project that Black people won't be working on, and will overburden our infrastructure.

When compared to the Fox Hills Mall renovation, what is extraordinarily different in the proposed Crenshaw Mall plan is the requested addition of 961 market-rate apartments and condos that will be priced well above the level affordable to the vast majority of Crenshaw community residents. 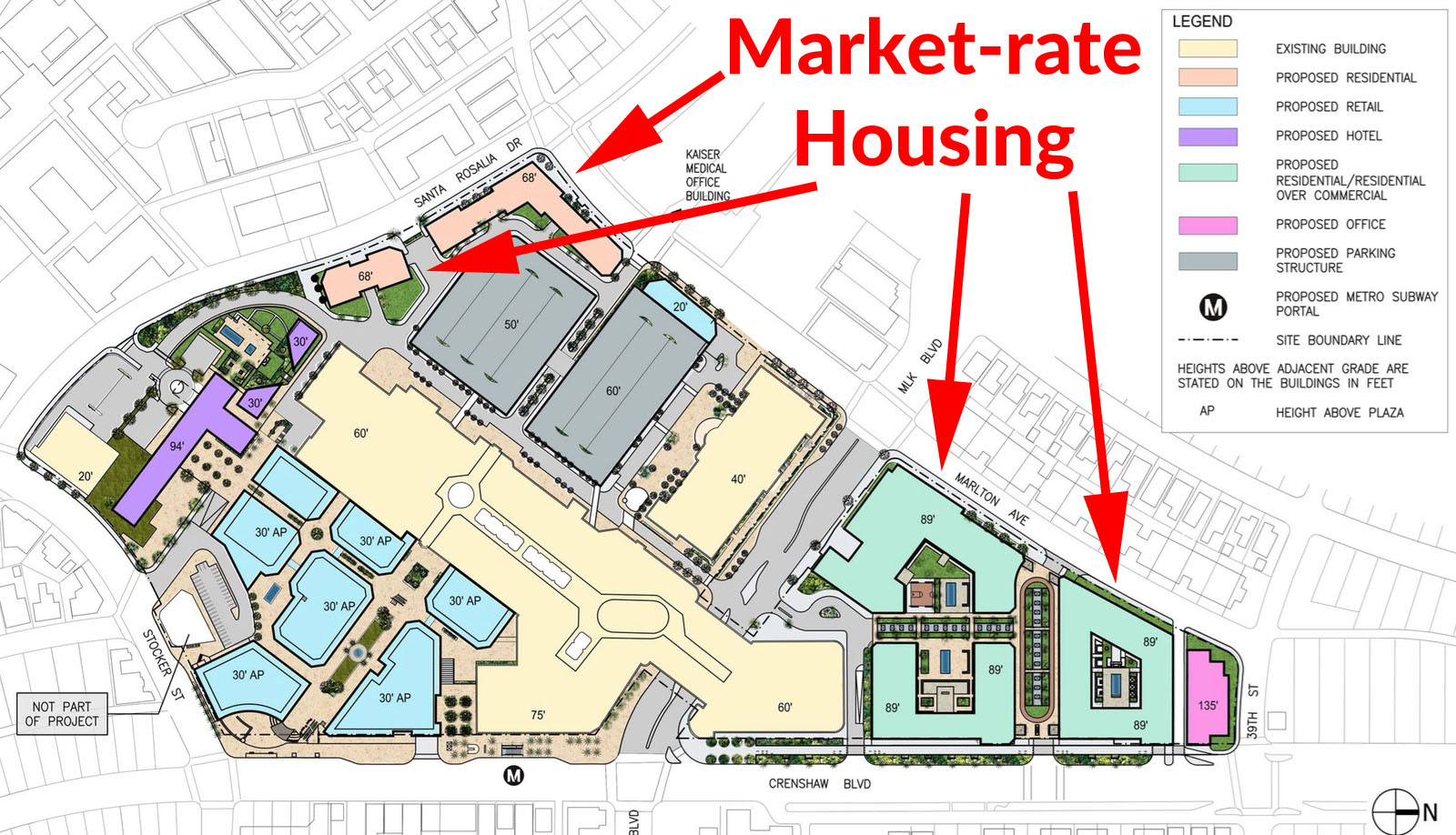 “MARKET-RATE” MEANS "NOT FOR US"

Market-rate housing is priced at whatever the L.A. real estate market determines, which is undeniably unaffordable to the vast majority of local residents.

FACT: According to the City of Los Angeles’ own documentation in 2015, to afford a new market-rate housing unit, a household must make $104,360 per year. (PDF pg. 3) Today, it is surely higher as housing prices have gone up.

Is it any wonder why at meetings in upper middle-class Baldwin Hills Estates, when we ask a room of 150 homeowners how many can afford to buy their homes today, only a handful of hands are raised?

Most residents who are still paying their mortgage have a note that is lower than the rent of a typical 2-bedroom “low-income” “affordable” housing unit. (Article on the 2017 affordable housing income thresholds)

This is the reality. And we have to recognize how the speculative real estate market threatens the stability and ethnic makeup of our community and city.

A failure to maintain the affordability of the Crenshaw community, which made apartment renting and homeownership possible for the vast majority of long-term residents, will drastically change Crenshaw’s ethnic makeup. It will change the character of our long-standing institutions and churches. It will weaken our potential political power at every level. It will push those who can least afford disruption to their home and to commute out to far-flung places, like Palmdale, and away from their communal and familial safety nets that are critical to living as Black people in America. It will increase homelessness.

To build a massive market-rate housing project in a neighborhood that cannot afford it is a clear message that the new development is not for existing residents – it is to displace long-time residents. It leads to what is called indirect displacement: a type of displacement that occurs when residents and businesses are gradually priced out/harassed out of the area and must involuntarily leave.

A displacement study for another gentrification mega-project, The Reef, in Historic South Central, with 1,440 market-rate housing units, was estimated to lead to a moderate to very high risk of financial strain or displacement for over 43,756 people who lived within a 2-mile radius of the project.

To deny that a similar outcome will occur in the Crenshaw community, if the mall redevelopment project is approved as proposed, is to deny that the sun rises in the East. It is to deny the on-the-ground experience and data of formerly low-income and working class communities in Oakland, San Francisco and Brooklyn. It is to deny the "urban cleansing" that took place in Hollywood, where in the name of "progress" then-Councilmember Eric Garcetti facilitated the erection of a flurry of out-of-scale luxury towers with market-rate housing, which unleashed an “economic tsunami” that in 10 years displaced 12,000 Latinos in Hollywood and East Hollywood alone.

The houselessness crisis hits the Black community particularly hard, as 47% of the people on the street are Black, despite amounting to only 9% of the overall population.

The roots of the crises are many. It is not because African-Americans have failed to "pull themselves up by their own bootstraps," which, by the way, isn't physically possible. (That's the point.) Any honest examination will show that it is a product of policies continually implemented by the public and private sectors to suppress Black wealth creation and exploit Black labor that goes back to the days of Reconstruction.

Not only were reparations never paid, but during Reconstruction, while the federal government was literally giving away stolen land to White settlers through the Homestead Acts, the KKK was harassing Black farmers off their fertile lands and Black Wall Streets were being bombed.

Simultaneously, unlike immigrant populations, Black small businesses owners were being locked out of doing business with the larger economy in policy and/or practice, a trend that continues today.

To pass the New Deal, President Roosevelt adopted provisions from racist Southern legislators to prevent Blacks from participating in many programs and did not extend benefits to jobs disproportionately held by Blacks.

Redlining and racially restrictive covenants limited the ability of Blacks to own land and where we could purchase resulted in bad home loans.

To create Eisenhower’s interstate highway system that facilitated the creation of white suburbs and white flight, the bulldozers were often deliberately run through Black communities.

After embarking on a policy of “urban renewal” that was aptly labeled “Negro removal” by James Baldwin, the federal government ripped Johnson’s New Society programs to shreds and shifted investment to building a law-and-order mass incarceration state that targets, criminalizes and incarcerates Blacks in an effort that expands prison labor, and renders masses of Black citizens permanently unemployable.

And after predatory lending by banks (and the totally inadequate response to it by the government) led to a foreclosure crisis that resulted in the greatest loss of Black wealth in modern history, the biggest private equity firms in the world and real estate flippers swooped in like vultures to our formerly defined ghettos, to cash in on the “New Urbanism” movement.

This is the history. To deny its role in the modern-day Black wealth, Black housing affordability, Black homelessness, and all associated crises, is to deny the existence of institutional racism in America.

WE RECOGNIZE THE NEW TARGET ON OUR COMMUNITY

The wrecking ball of cultural erasure and cranes of displacement are making their way South of 10 freeway. Though none as big as the Crenshaw Mall project, we are tracking six other market-rate housing projects just within a one-mile radius of Crenshaw-MLK.

Former mom-and-pop owned apartment complexes are being bought by LLCs with invisible investors. Two of the world's largest private equity firms are buying single-family homes. And banks continue to engage in predatory lending, and are denying loans for home purchases and refinancing to Blacks with the same credit score and income that they are approving for Whites.

Anyone with open eyes who seeks to know history will find the target on our community undeniably clear.

We have no illusion about how difficult this fight will be. This "ain’t our first rodeo" and we have learned much from veterans of site-fights and housing justice warriors.

We know that gentrification is a complex issue and that the many will seek to use that complexity to confuse and bamboozle residents.

We know that as we highlight the ethical bankruptcy of gentrification that the developers will attempt to convince the fortunate few stable Black homeowners to adopt a Clarence Thomas-philosophy of climbing up the ladder only to pull it up behind them, by suggesting that they advocate approval of projects and policies that push out their fellow neighbors who are low-income and renters.

We know that as we bring residents together to affirm our right to place, our right to self-determination, and the necessity of a good job with benefits, that the out-of-town developers will suggest that we betray our ancestral values system in favor of access to $6 cups of coffee provided by companies who seek to extract our limited dollars to increase the wealth of their rich shareholders.

We know that as we advocate for a new just and fair economy and real community benefits, as we advance the principles of community ownership, as we demand local hire/participation in construction and operation, and as we work on tangible projects such as cooperatives and land trusts, that the developers, privileged/elites and their agents will request neighbors reject these community wealth building models.

As we have done on transit, we will engage in continuous community/political education and opportunity for conversations with policy experts, lift up the stories of residents and communities that have been victims of gentrification, keep the needs of our most vulnerable neighbors at the forefront of our discussions, and combat the myths and unproven theories with facts. 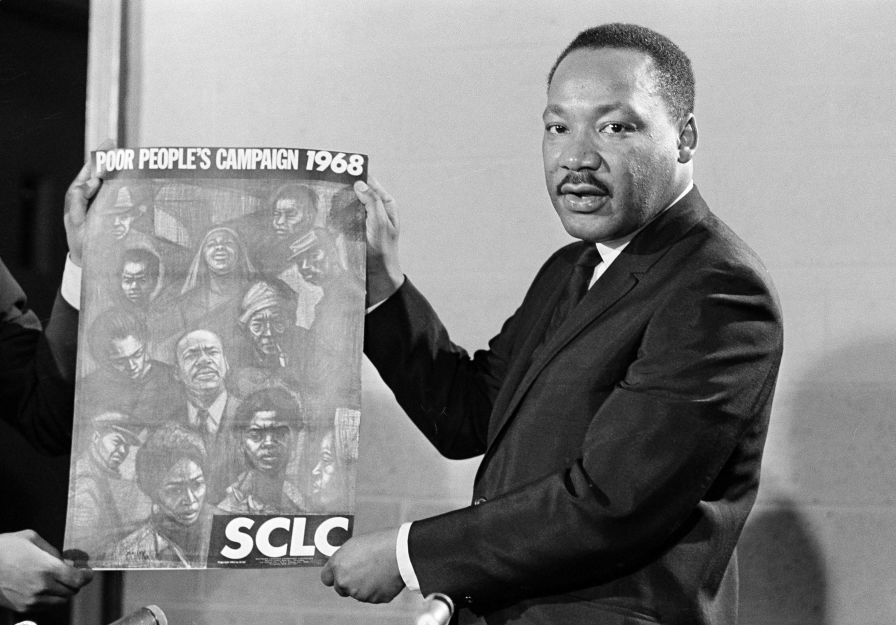 We will point to community-driven planning models and uplift efforts waged by true Black leaders in Black communities like the Dudley Street Neighborhood Initiative in Boston’s Dorchester community, and Mississippi’s Cooperative Jackson, led by Choke Lumumba and continued by his son, the new Mayor.

We will not quietly submit nor subscribe to the selfish morally-bankrupt economic system that many of our ancestors paid the ultimate sacrifice fighting.

We will constantly point out how America’s neoliberalism has and continues to exploit the masses and in particular Black people.

WE ARE READY FOR BATTLE

This is unfortunately but another site fight in Los Angeles. However, we find that due to the massive scale of the project, and the historical, cultural and ethical context that it has a particular importance.

At no stage will we apologize for advocating for long-term residents, tenants, the houseless, the poor, the working class, and maintaining the integrity of Los Angeles’ last Black cultural center.

We at the Crenshaw Subway Coalition are ready to struggle.

We have put our war paint on.

We are rising up a banner to build a movement in the wondrous tradition of our ancestors, ever mindful of our duty to future generations.

We will, in the words of Amílcar Cabral, "Mask no difficulties. Tell no lies. And claim no easy victories." 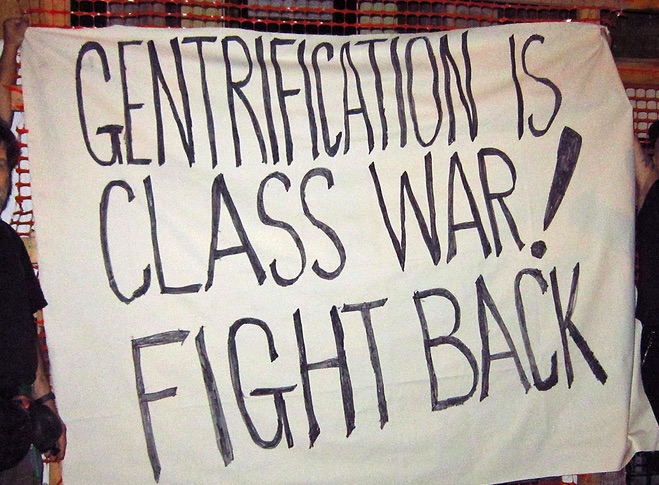