The Los Angeles Tenants Union, a membership-based, tenant-centered movement that is fighting for the right to housing for all recently published a lengthy explanation for why they support Measure S. The organization responded to many of the false claims being stated by the opponents to the campaign. Crenshaw Subway Coalition is proud to stand with the LA Tenants Union, both in support of Measure S and in their well-researched accurate analysis. Read below for LATU's full statement, sent on February 13, 2017, below. Or download a copy here.

Why does LATU support Measure S? 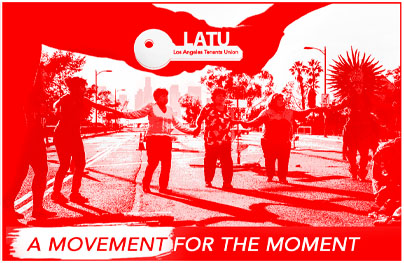 Tenants who support Measure S represent the diversity of those most affected: low-income, seniors on fixed incomes, homeless, working families, LGBT tenants, single-mothers, young professionals, artists, and disabled tenants. Many of these tenants depend on rent-stabilized housing to be able to remain in neighborhoods like Hollywood, Downtown, Leimert Park, Boyle Heights, North Hollywood, or Echo Park. The market-rate units that often replace theirs are inaccessible and unprotected.

Los Angeles has proven that it is not yet able to practice development without displacement. Imagined housing construction of the future relies on today’s practices of mass eviction and harassment. Nevertheless, those opposed to Measure S continue to bombard tenants with hypothetical scenarios and false claims meant to scare Angelenos from standing up for their right to safe and affordable housing.

Measure S suspends the practice of spot zoning (changing the zoning status for single parcels to allow a desired project), which is abused around the city to allow developers to build luxury towers in neighborhoods. Measure S ensures that L.A. will follow its General Plan, and not merely play host to various amendments and exceptions for real estate speculation.

The measure involves a 2-year moratorium on new developments that require spot zone exemptions—these exemptions make up the roughly 5% of projects in the city that would be halted (other construction would continue as normal, including 100% affordable housing for projects not requiring Amendments to the General Plan, such as changing an area from industrial to residential).

Forcing the city to follow its own planning rules will give tenants a much needed reprieve from the demolition of existing, actually-affordable rental housing in neighborhoods where rent-stabilized housing has been put on the chopping block to make way for large scale development projects. It gives the L.A. Tenants Union time to breath and time to organize.

CLAIM: THE MORE SUPPLY WE HAVE, THE CHEAPER RENT WILL BECOME.

Can you afford $3,000 per month for rent? Neither can the members of the L.A. Tenants Union. Those luxury apartment buildings that have sprouted up around town have never intended to deliver on their trickle-down promises. In practice, tenants know that such projects either go right next to us or replace our own housing.

When they go next-door, the value of properties around us increases, which in turn causes our rent to increase. They show out-of-town developers that our block is now ready for speculation. The owners of our older, rent-stabilized buildings begin their efforts to harass and evict us until it’s time for them to cash out on their newly in-demand parcel. Even developer advocates admit that the benefits of their simplistic supply-and-demand solutions never actually trickle down to us. In a report published by the State of California in Feb. 2016, the state reflected that most housing built today does not become affordable until 25 years down the road. Why should tenants have to wait for decades to get housing that is affordable?

When new development projects go in place of our buildings, we are evicted. We lose our homes and our communities. We can’t find nearby places we can afford. Long-time, elderly tenants are sent packing without any guaranteed right of return. If the new buildings have any replacement “affordable” units, they’re usually not for us. The median income used to determine eligibility for those new “affordable” units excludes most tenants, because they are single, or couples, or because they make too little to qualify. In other words, after construction, hundreds more tenants are added to the pool of renters competing for the lowered stock of affordable housing, while hundreds more market-rate units sit empty, or are shopped around on Airbnb by newer, rent- burdened tenants.

It’s hard to say “Not in my backyard” when you’re being kicked out of the yard. The tenants at Yucca and Argyle in Hollywood are not NIMBYs—a 32-story market-rate apartment and hotel is slated to replace their community of 40 units of rent-stabilized housing. The tenants have been fighting for over a year for their right to return. The tenants of the 4 parcels surrounding the Crossroads of the World on Sunset Blvd. cannot be called NIMBYs—over 100 units of rent- stabilized and student housing will be demolished for condos, a hotel, fancy retail, and a rooftop bar. Occupants of over 500 rent-stabilized units in Miracle Mile fighting for a Historic Protection Overlay Zone cannot be called NIMBYs—they’re people afraid of losing their homes. This is why members of the L.A. Tenants Union support Measure S.

In current practice, developers already run the city, with the majority of the City Council and the mayor deeply complicit in their behavior. By not adhering to a General Plan, the mayor and Council support one-off, private development proposals as they come, using them as occasions to appear as if the city has a vision for planning. Their approval of such projects (then realized through the practice of spot zoning) is directly bought through campaign donations, as Angelenos learned through reporting on the recent Sea Breeze scandal. By ending the practice of spot zoning and forcing city leaders to update and abide by the General Plan, Angelenos will regain some of the influence they have lost with their elected representatives.

Yes. The principal financial support for the No on S campaign comes from luxury real estate developers: Miami-based Crescent Heights (owned by a billionaire), Australia-based shopping mall builders Westfield Corp., and several other notorious Trump donors. Eli Broad, who made his money building sprawling suburbs and now has his own museum, has donated tens of thousands. It’s insulting to think that these corporations somehow represent the communities of Los Angeles, or have our best interests at heart.

The whims of real estate are, for better or worse, huge factors for nonprofit developers and housing services groups. Such organizations tend to follow the status quo and build their fundraising around it.

LATU is a diverse, volunteer-run, tenant-centered movement not beholden to any financial support stream. Our members voted to endorse Measure S, agreeing with the Coalition sponsoring the measure and the AHF on the particular issues addressed.

CLAIM: MEASURE S PUTS A STOP TO GENERAL PLAN AMENDMENTS—IF DEVELOPERS ARE NOT ALLOWED TO TURN INDUSTRIAL OR COMMERCIALLY ZONED AREAS INTO HOUSING, THEY WILL COME AFTER MORE OF THE RSO HOUSING.

LATU members refuse to be threatened. For years, developers have already had the ability to make the kind of land-use changes that Measure S stops: What has it brought Angelenos so far? It brought projects like One Santa Fe in the Arts District, the great wall of the L.A. River where renting a studio apartment the size of a two-car garage is around $2000+ per month. Rosy visions for Transit Oriented Development have given us buildings like Koreatown’s The Vermont, where a 2-bedroom apartment for you and your public transit-dependent family would cost up to $4500 per month. This is not the kind of investment communities need. Why should renters trust that the future would bring them anything different?

Our tenant-led movement organizes against an urban and political landscape where developers are going to build no-matter what, with no accountability to community members. Even with the weak incentives of inclusionary zoning provided by Measure JJJ, we recognize that developers will continue to build and displace residents for profit while hiding behind the banner of “affordable housing” or flawed theories of trickle-down economics.

If you are a small-scale developer or planner who really cares about building a better LA, start organizing against the worst offenders in your field and help us fight for stronger tenants’ rights before advocating for more development!

CLAIM: MEASURE S WILL MAKE IT IMPOSSIBLE TO BUILD HOUSING FOR THE HOMELESS THAT WAS APPROVED BY MEASURE HHH.

L.A. Tenants Union acknowledges that city officials have stated that a handful of projects currently identified for satisfying the city’s responsibilities regarding Measure HHH that passed in November 2016 would be complicated or prevented. But the notion that Measure S will prevent the implementation of Measure HHH is patently false. Measure S does allow for spot zoning if the housing to be built is 100% affordable. This provision encourages the city to provide permanent supportive housing for the homeless while ensuring that funds designated for those in need are not misused. Measure S also allows parking lots, warehouses, mini malls, and any part of a parcel zoned as commercial to be re-zoned to residential if it is for 100% affordable units. Also, what about building permanent supportive housing on property the city’s Housing Authority already owns, as part of a needed effort to extend public housing and serve those most in need? In the coming days, L.A. Tenants Union will announce its support of Measure H, also on the March 7th ballot.

Let us remember that Measure S is only in effect for 2 years, while the city develops a more holistic approach to solving housing and displacement. Measure HHH is just beginning to be developed. By the time Measure HHH is completely implemented, the 2-year period will be over.

For tenants across Los Angeles, the so-called housing crisis is actually a crisis of mass displacement. Tenants support Measure S because the surging construction of market-rate housing does nothing to address the glut of unaffordable housing in Los Angeles, not now nor in the “trickle-down” future.