SB 827 is a Declaration of War on South LA

You'll be hard pressed to find a bill in the state legislature proposed by a Democrat that is a bigger threat to the stability of our community than SB 827, authored by the State Senator from San Francisco - Scott Weiner.

SB 827 would MANDATE that every inch of land within a 1/2 mile of a rail stop or a bus stop that has a bus line that comes at least once every 15 minutes during rush hour allow buildings as high as 55 to 85 feet with no parking requirements and no density limitations.

SB 827 would impact almost all of Los Angeles south of the Santa Monica mountains, but especially the communities most vulnerable to gentrification and displacement like South LA and East LA. 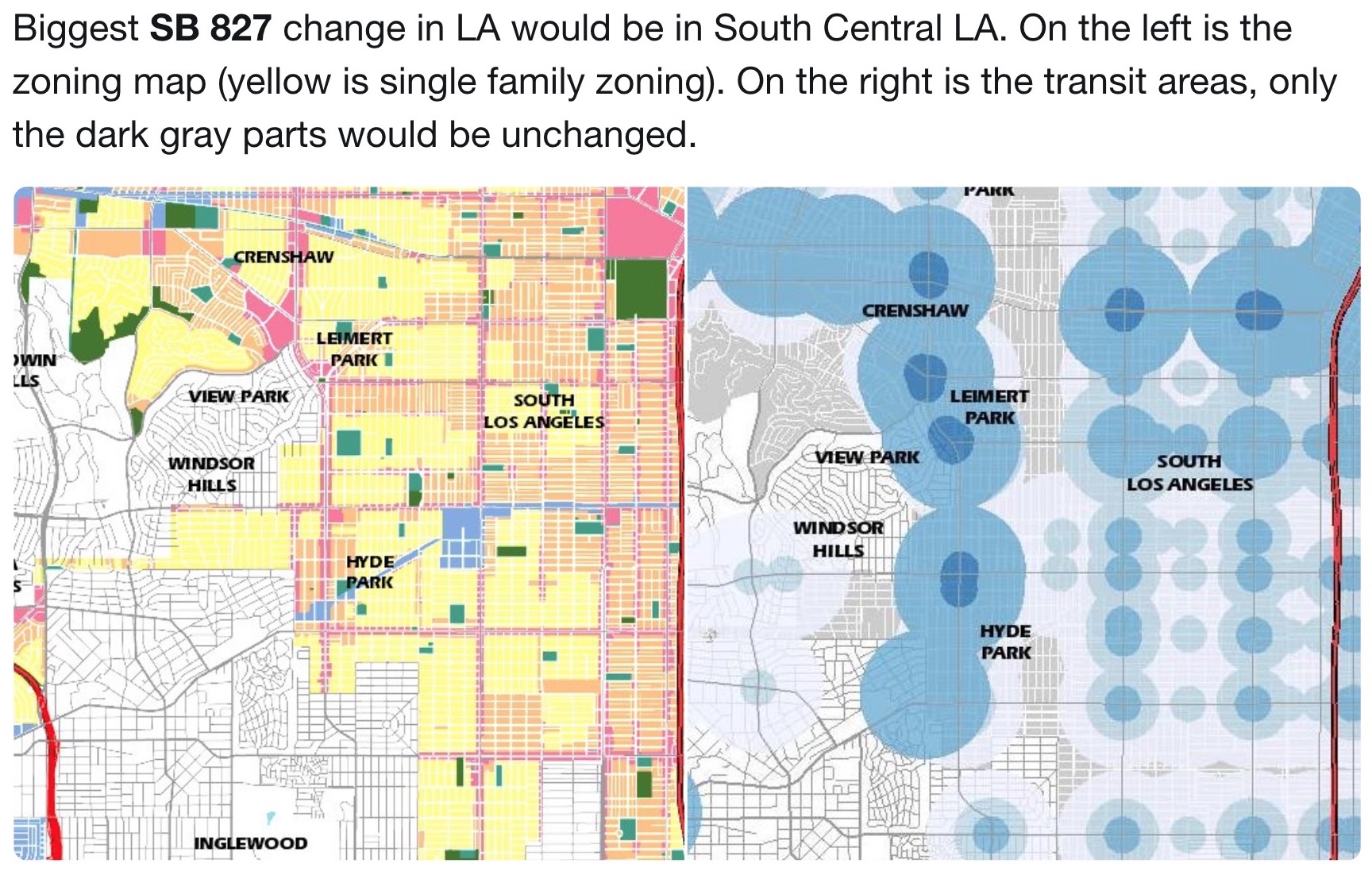 SB 827 would usurp all of the recent South LA's community plan updates - those years of conversations, workshops and hearings that we engaged in - to replace it with a vision concocted by a pro-gentrification, pro-displacement, real estate industry puppet in Sacramento who goes by the name of Scott Weiner.

Scott Weiner is to gentrifiers, what Donald Trump is to racists. 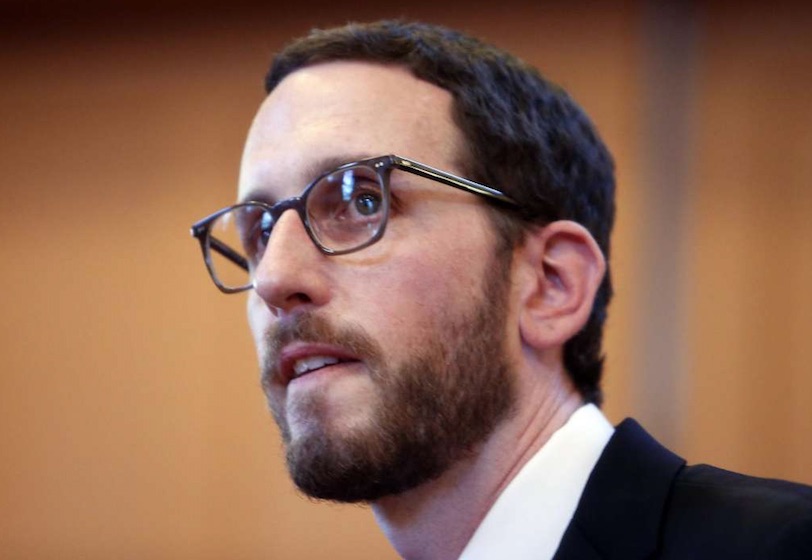 In many respects, like some of the corporate Democrats who sell out working class people, Weiner is worse than Trump, because on issues that don't effect the bottom line of his political campaign backers, like gay rights, he and elected officials like him sound quite progressive. He uses his support of some progressive issues to maintain credibility among liberals. However, the unfortunate reality is that Scott Weiner is a modern-day Andrew Jackson, pushing a legislative agenda to enact a 21st century Trail of Tears.

Like President Jackson's Indian Removal Act, SB 827 seeks to exile low-income people of color who currently live in the urban centers of commerce, culture and community that WE have built, to far-flung places that go by the name of Victorville, Lancaster, and Palmdale, or even worse onto the street. 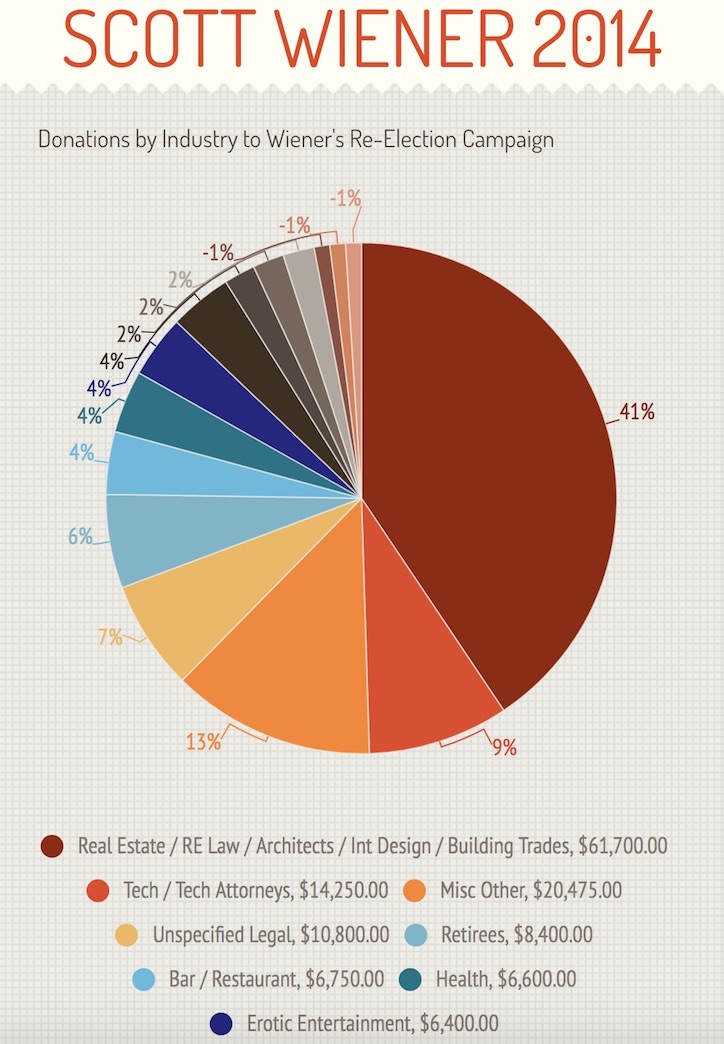 Not since the "Urban Renewal" projects of the 1960s (most appropriately characterized as "Negro removal" by James Baldwin) has something so radical and detrimental to the stability of urban communities of color in California been proposed. It will undoubtedly lead to the massive demolition of the limited affordable housing stock we still have in L.A. (rent-controlled apartments, like the two-story buildings that line King Blvd and Leimert Blvd, and almost all of Baldwin Village, which are increasingly being bought by Wall Street investors) to be replaced by 5-8 story market-rate housing, where the average rent will go for $3,500/month or more. It will undoubtedly make land values in South LA skyrocket to make new affordable housing construction infeasible and home purchases by the working-class impossible, as investors and flippers operating in coordination with banks that have been engaging in predatory lending, take back the land.

And out the window goes smart planning or any concept of neighborhood character as these 5-8 story buildings would be permitted in the middle of single family home neighborhoods, and SB 827 has no requirements that the new developments be accompanied by investment in our neighborhood schools, parks, transportation infrastructure, or fire services.

It should come to no one's surprise that the one part of the state where there actually is a severe imbalance between housing production and employment centers (the suburban cities of Silicon Valley) is not the focus of Weiner's SB 827 or legislative efforts in general. Rather Weiner's focus are the parts of the state that actually has lower rents and land values: rent-controlled historically Black and Brown urban centers like South Los Angeles - places that are already plenty dense and have high transit ridership.

Like the Colonizers before them, YIMBYs claim the 'Hood as Theirs!

The bill is backed by group that calls themselves YIMBYs, which stands for "Yes in my backyard." Like the colonizers whose agenda they seek to replicate, it takes a certain entitlement/supremacist mindset to call a community they didn't grow up in, don't live in or are new to as "theirs." It's NOT their backyard - it's ours. And we're not about to give it up. WE SHALL NOT BE MOVED!

YIMBY groups are the very definition of "astroturf" - fake grassroots organizations backed by a corporate industry. The overwhelming white 30s-somethings-led groups push to remake our community of established institutions and organizations led by people of color. They aren't long-time residents of places like our South Central.

That's why they could care less about the predatory lending that led to the greatest evisceration of Black wealth in decades - it wasn't their grandma whose mortgage became unaffordable overnight.

They don't talk about or prioritize legislation to address modern-day redlining (Blacks are being denied home loans and refinancing in our community that are being granted to Whites with the same credit score and incomes), because they're not the ones being discriminated against.

They never discuss the role of foreign money, Wall Street investors and rampant speculation in driving up land values that has made the communities our parents bought into completely unaffordable to even working middle-class Black people today.

They never propose solutions to fight the expansion and rise of Wall Street landlords like Blackstone, the largest private equity firm in the world, which in one day bought up 1,400 homes in Atlanta, because YIMBYs are largely funded and supported by the real estate investor industry.

YIMBYs are completely indifferent and nowhere to be seen on the strategies of protection and preservation of our dwindling affordable housing stock, because they're not being asked to move-in their cousin who makes less than $30K a year and was harassed out of their $850/month two-bedroom in Baldwin Village by the new corporate landlord who can now collect $2,200/month for the unit.

As just one example, not a single major YIMBY group has expressed strong support for what will be the biggest mobilization of housing justice groups in Sacramento this year - next week's Assembly Housing Committee hearing on AB 1506 - the bill to repeal the horrible Costa Hawkins Rental Housing Act, which all housing justice groups in the state consider the top legislative goal for 2018.

Scott Weiner's SB 827 is a declaration of war on every urban community in California - and especially our urban communities of color.

It is time that we put our war paint on soldiers. SB 827 is bill that must be killed.