About the Crenshaw Subway Coalition 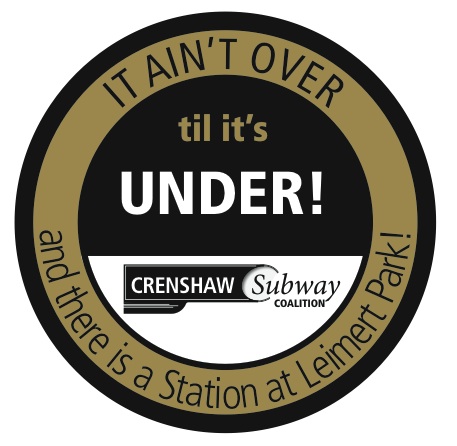 The Crenshaw Subway Coalition is a tax-exempt 501(c)3 nonprofit organization led by residents, merchants, property owners and stakeholders along the Crenshaw Boulevard corridor who are impacted by MTA’s $2.1 billion Crenshaw-LAX Light Rail Project. The organization began as a part of a coordinated effort with the Citizens’ Campaign to Fix the Expo Rail Line (Fix Expo) established in 2006, and became an officially independent corporation in the summer of 2011 after it became clear that the Los Angeles County Metropolitan Transportation Authority was not heeding to the needs and requests of the Crenshaw community.

The Crenshaw Subway Coalition seeks to be a vehicle for advancing community involvement in the Crenshaw-LAX Light Rail Project and Crenshaw Boulevard development process through engagement, education and empowerment, and by promoting social, economic and racial justice. To that end, the organization has three specific objectives as it relates to the Crenshaw-LAX Light Rail Line, the largest public works project in the history of South Los Angeles:

Through the empowerment of Crenshaw Corridor stakeholders it is our hope and belief that we can reverse the unfortunate history of transportation projects being built through, but not for our communities, and establish a powerful basis for pursuing community-driven development predicated on local ownership and economic empowerment. Crenshaw Boulevard is after all the last African-American business corridor in the Southland and Leimert Park Village is the region’s center of African-American culture. Accordingly, our success is intimately important to the African-American community, and all who value living in a multi-cultural society.

So what better place to start than here on Crenshaw? And what better time than 21st century America?

Crenshaw Subway Coalition holds regular open meetings in the community, frequently presents before community-based organizations and in the media, and advocates before the MTA board and elected officials.

Special thanks go to York Knowlton, a resident of Hyde Park, who designed the Crenshaw Subway Coalition logo.