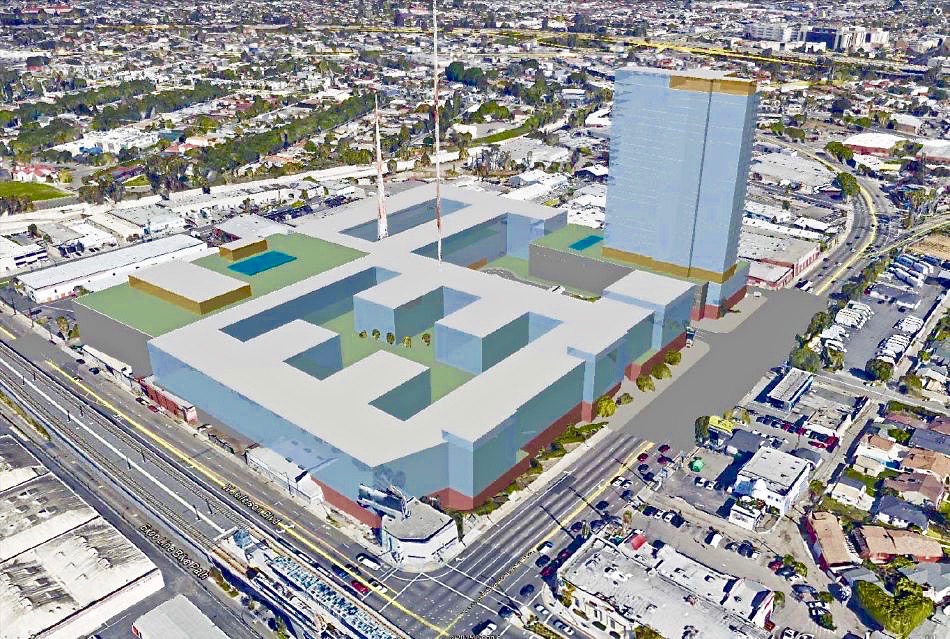 The project, known as Cumulus, would impose nearly 1,200 luxury housing units in a fortress-like complex that includes a 30-story, 320-foot skyscraper at the foot of Baldwin Hills and adjacent to the Expo Line La Cienega station. The Cumulus project would add a staggering 1.9 million square feet of development at the frequently gridlocked intersection of La Cienega/Jefferson, which is a shortcut to LAX that is already jammed with east-west and north-south commuters much of the day.

“The building is too damn high, and the Jefferson/La Cienega intersection is already a traffic nightmare,” said Clint Simmons, a nearby resident and member of Expo Communities United.

Crenshaw Subway Coalition and Friends of the Neighborhood Integrity Initiative are two independent groups fighting for rational city planning that respects neighborhood character and ends land-use abuses. The groups jointly filed their complaint for injunctive and declaratory relief in Los Angeles Superior Court on June 24. The lawsuit cites gross violations of the City Charter and California Environmental Quality Act by the City Council, which on May 25 unanimously approved the Cumulus project.

In approving a 30-story skyscraper in an area where no building exceeds even 4 stories, the Cumulus project is among the worst examples to date of the City Council’s pattern of defying all local protective zoning and height/density limits to help enrich wealthy developers — who shower the City Council with campaign funds and lobbying. In 2014 and 2015, Carmel Partners (CP V Cumulus) of San Francisco paid $59,356 to well-connected lobbyists to influence L.A. officials, and gave a total of $4,900 to a council member's “officeholder account” and the campaign chests of City Council members who were key to backing the project.

National and international developers are swarming Los Angeles to cash in on the development craze currently gripping the Los Angeles Department of Planning and elected Los Angeles politicians, creating a glut of luxury housing with a huge 12% vacancy rate, according to the city's own data.

The Cumulus project, which will introduce more than 1,000 new unaffordable high-rise apartments, is aimed at upscale employees in nearby Culver City, while acting as a slap in the face to the surrounding South Los Angeles neighborhoods of mostly Black and Latino residents. The City Council even approved the project without any local hire requirements.

Damien Goodmon, Executive Director of the Crenshaw Subway Coalition, said, “The Cumulus project is the poster child for wildly out-of-scale development that is clearly not for existing residents and feeds concerns like gentrification. We believe in development without displacement and responsible community planning. This is a gross violation of both of those principles. Furthermore, the Cumulus project sends a horrible message to developers that ‘Anything goes,’ which threatens the right of existing residents to the neighborhoods we have built and want to see improved for us.”

Beverly Grossman Palmer, the attorney representing Crenshaw Subway Coalition and Friends of the Neighborhood Integrity Initiative, said, “The entitlements granted to construct the Cumulus Project fly in the face of sound planning and violate City Charter rules about when the General Plan may be amended.”

Palmer notes that, “The City ignored the limitations included in the newly proposed West Adams Community Plan and permitted construction of a 320-foot tower that far exceeds the permissible height on all neighboring properties. This is a perfect example of ‘spot zoning’ to benefit a particular developer, exactly the practice that the City Charter prohibits.”

Outrageously, the City Council approved a special “General Plan Amendment” in its efforts to help the developer get around city land-use rules on the very same day that an environmental impact report was publicly released detailing the updated West Adams Community Plan. The new Community Plan, 8 years in the making, allows an increase of the building height limit on the site from 45 to 75 feet with a possible increase to 86 feet for mixed-use projects, far below Cumulus’ 320 feet.

City Hall’s decision to break zoning rules on behalf of a wealthy developer is a clear-cut message that Council members viewed residents’ years of input and engagement with city officials on the West Adams Community Plan as meaningless. Such actions have been proven to ignite a domino effect that drastically alters neighborhood character. The Council has frequently used approval of a single illegal tower to justify more high-rise towers in areas where they are expressly prohibited by the zoning code.

Darren Starks, President of the Baldwin Neighborhood Homeowners Association, said, “We are deeply concerned about the domino effect of the Cumulus skyscraper. One skyscraper is bad given the current traffic gridlock. But we see this as the start of more to come.”

Jill Stewart, campaign director for the Coalition to Preserve LA, which is sponsoring the Neighborhood Integrity Initiative heading for the March 2017 ballot, said supporters of the ballot measure joined the Crenshaw Subway Coalition in suing City Hall because “City officials are steamrolling over a community of color that supports development, but not outrageous and illegal development that will ruin their area, jack up rental prices, price out existing residents, and jam up the streets in an area reaching from South L.A. to the Wilshire District to Palms. The Neighborhood Integrity Initiative will put an end to the soft corruption at City Hall, where rule-breaking mega-projects are granted ‘spot zoning’ favors after council members and the mayor take money from those very same developers.”

The Cumulus skyscraper complex is far more than a “project.” It would forever change local neighborhoods in and along the Baldwin Hills, and would tower over the Ballona Creek Bicycle Path and Ballona Creek. Yet the Cumulus proposal is practically unknown to the public, having been rushed through its approvals with little mention of it by the area's representative, Los Angeles City Council President Herb Wesson.