For the first time in the LA Times coverage of this issue (or the Expo Line issue for that matter) columnist Hector Tobar tackles the systemic inequity in local transportation decision-making, and adds Leimert Park Village deserves a stop on the Crenshaw-LAX Line. The full article is below and credit for the image goes to Mel Melcon.

The MTA is bringing light rail to the Crenshaw corridor, but not to Leimert Park, the vibrant neighborhood a longtime resident and transportation activist calls ‘our Little Africa.’ 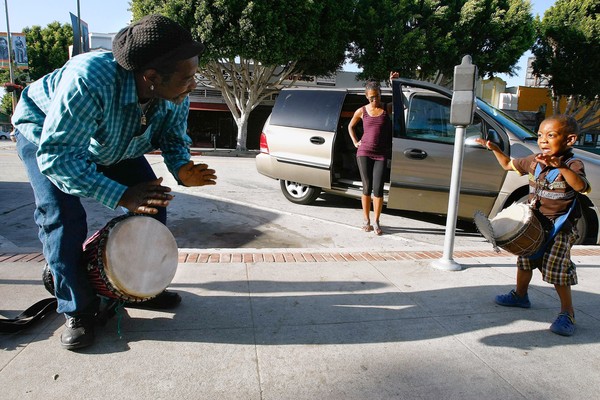 When I was a kid, I had a map with a dotted line for the Beverly Hills Freeway. It was going to run just south of my East Hollywood neighborhood, plowing through the Fairfax district on its way to the sea, bulldozing a mansion or two along the way.

It was never built, of course.

Another dotted line on that same map marked the Century Freeway, Interstate 105, which was built. Caltrans cut a gaping no-man’s land through South L.A. and Lynwood years before construction began, and so fostered crime and urban decay.

Working-class L.A. bore the brunt of the sacrifice in the building of L.A.’s massive transportation network. Communities of color were especially hard-hit.

Now the Metropolitan Transportation Authority is undertaking a big public works project that can help atone for the sins of the past. Light rail is coming to the Crenshaw corridor. Everyone agrees it will be a boon.

But Metro’s board has no plans for a Leimert Park station, though a vote on the issue is scheduled for May 26.

Metro’s trains now bring tourists to Olvera Street and Little Tokyo. They should do the same for Leimert Park, said James Fugate, co-owner of Eso Won bookstore, which is located in the heart of the community, near a town square that’s becoming a focal point of African American culture in L.A.

“It really does make sense to build it here,” Fugate said. “We need a station. This is an up-and-coming area. And it’s a good tourist destination — except that it’s hard for tourists to get here.”

So far, plans call for a train stop half a mile away at the Baldwin Hills Crenshaw Plaza on Martin Luther King Boulevard, and another more than a mile away on Slauson Avenue.

As for the site of an annual Juneteenth festival, an art walk, a Kwanzaa gathering, a book festival and many other events, it would be bypassed.

People in the community have every reason to be upset.

Considering all the poor policy decisions inflicted on black L.A. over the years, you’d think today’s leaders would be falling all over themselves to get it right this time.

We’re told that money is scarce, that the area doesn’t have enough economic activity to justify the investment — some $148 million for the Leimert Park station alone. We’ve been hearing such arguments about South L.A. for decades.

L.A. County Supervisor Mark Ridley-Thomas says he’s been pushing for a Leimert Park station as well as a tunnel underneath a one-mile section of Crenshaw just south of Leimert Park known as Park Mesa Heights. Ridley-Thomas and others want the tunnel (price tag: more than $200 million) for the same reason they want the station: because it’s what best for their community.

MTA studies show that with Metro trains running above ground, automobile traffic at the intersection of Slauson and Crenshaw would degrade to an unacceptably congested “F” status, the supervisor told me. This would probably lead city officials to restrict new building permits in the area. We’d be saving money now but stealing it from the community’s future.

Scarce parking, bad traffic and years of construction are the kind of perfect storm that can overwhelm a small business like the one belonging to Mofizur Rahaman, the owner of Taj Mahal Imports, a storefront selling incense and oils in fragrances such as frankincense and Egyptian musk.

“No, no, no,” Rahaman told me when I described the plans. “Underground is fine. No one is bothered.”

A few doors down at the Black Diamond gym, Darvell Powell, 30, paused from his workout to talk about the lessons of the Blue Line, which runs above ground as it passes through South L.A. He said he was inside a Blue Line train once when “three Latino boys ran across the tracks and the last boy didn’t make it.”

“We’ve got kids here,” he said, referring to nearby Crenshaw High. “If you’re going to build it, get it off the street.”

Wandering back to Leimert Park, I got a hint of the potential a new station there could unleash.

Eso Won Books was getting ready for an appearance by Spike Lee, who was promoting his latest documentary. And copies of Manning Marable’s new Malcolm X biography were flying off the shelves.

One customer talked to Fugate about the day in 1965 when the militant activist died.

“I remember when I heard,” the patron said. “It was a Sunday. I was coming out of St. Paul’s Church at 12th Avenue and Washington…”

Leaving the bookstore, I came upon an art gallery that recently closed. Plywood covered the entrance of the nearby Vision Theater, a 1930s gem whose ongoing renovation is a source of hope for local residents. I was reminded of what Mariachi Plaza in Boyle Heights looked like before the Gold Line arrived — alive, yes, but badly in need of a boost.

Now we’re asking South L.A. to sacrifice — again — so that we save money for other projects, including the Subway to the Sea. Given L.A.’s history, it doesn’t seem right to me.