Measure J - We Will "Remember in November" 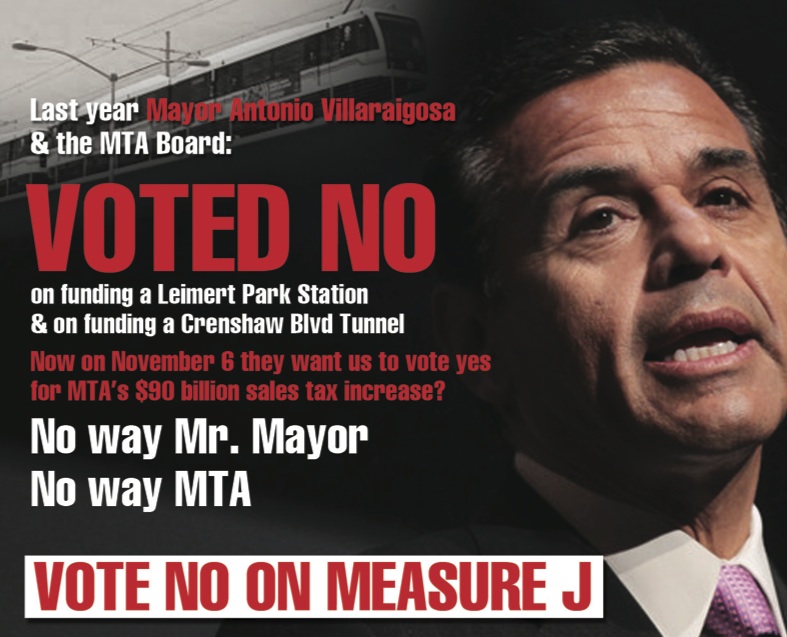 WHEN YOU VOTE ON TUESDAY REMEMBER MAY 26, 2011. 600 black leaders of the civil rights, faith, nonprofit, political and residential communities swarmed the MTA board room. It was a show of political unity unseen in a generation. The “black community had finally come together.” With one voice we respectfully requested our tax dollars be added to the Crenshaw/LAX Light Rail Project to: 1) underground the line on Crenshaw Blvd for 11 blocks to protect the last black business corridor in Southern California, and 2) add a station at Leimert Park Village to assist our revitalization of “Little Africa.”

Under the leadership of MTA Board Member/Supervisor Mark Ridley-Thomas, prior to the meeting the money and three of the seven votes needed for passage had been identified. The other four votes were controlled by the then-MTA Board Chair the Mayor of Los Angeles. All eyes were on Antonio Villaraigosa.

Before the meeting, the Mayor very publicly sat down with the L.A. Sentinel and said to them he wanted to help. Mayor Villaraigosa had lied.

Villaraigosa began his statement that brisk Thursday morning admitting that the only reason any MTA projects in L.A. County were possible – including his pet project, the Wilshire Subway to the Sea – was because South L.A. voters had repeatedly gone to the polls and voted for them.

He and his lieutenants on the MTA board then went on to display palpable resentment that the community that had been making deposits into the MTA account for decades would dare attempt to make a withdrawal. Our signature was no good the Mayor told us. We were not joint owners of the account. The check, he said, was to be marked “INSUFFIENT FUNDS,” and he voted against funding the 11-block tunnel and Leimert Park Village station.

On Tuesday, ballots throughout L.A. County will feature Measure J – another one of those taxes for MTA. It’s a half-cent sales tax increase until 2069, projected to generate $90 billion and it was concocted by none other than Antonio Villaraigosa.

The Yes on J campaign television ads prominently feature images of black construction workers. Imagery is apparently supposed to be satisfaction for us, because of the $90 billion projected to be generated by the Measure J sales tax increase, not one penny is to return for transportation projects in the South L.A. community.

NOT ONE PENNY! is to add a station at our region’s African-American cultural center – Leimert Park Village.

NOT ONE PENNY! is to underground the Crenshaw/LAX Line in Park Mesa Heights to protect the last black business corridor in Southern California and the lives of our school kids.

NOT ONE PENNY! is for Expo Line safety improvements and community mitigation.

NOT ONE PENNY! is for safety improvements on the deadliest light rail line in America – the Blue Line.

$90 BILLION DOLLARS AND NOT ONE PENNY IS FOR ANY SOUTH L.A. PROJECT!

Mayor Antonio Villaraigosa has shown us who he is, and it is incumbent upon all voters to believe him. He and the MTA board have promised our community nothing, and even if he did at this late date, what intelligent person would believe him?

The Broader Implications of Voting No on Measure J

By now it should be clear that MTA and Mayor Villaraigosa are making their decisions based on their perception of South L.A. power.

By voting No on Measure J, South L.A. citizens can personally protect their economic interests, and more broadly, collectively send a message to MTA, Mayor Antonio Villaraigosa and the many who are watching that the requests of South L.A. must be respected. By refusing to be bamboozled by empty promises and slick ads featuring black construction workers, South L.A. can officially end the days of being cut out.

On November 6th by exercising our democratic right (a right gained through the ultimate sacrifice of giants in the civil rights movement) to say NO to Measure J, we in South L.A. can usher in a new day and reclaim our rightful place as an equal partner.