L.A. voters go to the polls Tuesday to elect the next Mayor. The victor will take a seat and make three appointments on the 13-member MTA Board, replacing current Mayor Antonio Villaraigosa and his three appointees (Councilmember José Huizar, former Assemblyman Richard Katz and Mel Wilson). We vividly remember that at the May 2011 MTA board meeting Villaraigosa’s block of four voted against the motion to fund the Leimert Park Village station and Park Mesa Heights tunnel. The motion failed by exactly four votes. Accordingly, flipping the Mayor’s block from “No” to “Yes” is critical to our effort to secure a tunnel in Park Mesa Heights to protect/enhance Los Angeles’ last black business corridor and protect life, and guarantee a station at the Southland’s African-American cultural district.

On the station both received grades of “A-”, while on the tunnel Controller Wendy Greuel received a “B+” and Councilmember Eric Garcetti a “C.”

It is important to note that: 1) this is not an endorsement of either candidate (we are a 501(c)3 organization and thereby prohibited from endorsing candidates for office); 2) both candidates could be more vocal “champions” for the Park Mesa Heights tunnel; and 3) regardless of who is elected on Tuesday, our community will need to remain diligent in this battle to secure the Park Mesa Heights tunnel and Leimert Park Village station.

Wendy Greuel and Eric Garcetti separately participated in closed-door meetings with about 20 of the core members and key advisors to the Crenshaw Subway Coalition, including former elected officials, former candidates for public office, economic development professionals, transit development professionals, business leaders, civil rights leaders and activists. The group included people who had already made up their mind and endorsed one of the candidates and people who remained neutral. All were united on the community’s demand for a subway station at Leimert Park Village and an 11-block tunnel in Park Mesa Heights from 48th Street to 59th Street, the last remaining street-level portion on the Crenshaw Blvd section of the rail line. After each meeting, correspondence was sent to the candidates to follow-up on what was discussed, and to request written clarifications/confirmation to serve as a document that the community could use as a basis of accountability. The letters by both candidates, along with their verbal statements are below.

Garcetti’s letter states: “As Mayor, I will continue to aggressively fight for the rail stop in Leimert Park…”

Greuel’s letter states: “I commit to…[c]hampion the effort to ensure that the Crenshaw/LAX Line project includes a station at Leimert Park Village…”

And both candidates’ written commitments align with their verbal statements on the station.

However, it is important to note that the MTA board is currently scheduled to decide the fate of the Leimert Park station at their June 27 meeting, which is before the next Mayor takes office (July 1). Thus, the candidates’ positions on the station may be moot. But if the MTA does not agree to add the station to the project both appear committed to ensuring it.

The Real Metric is the Park Mesa Heights Tunnel

The more revealing question regarding the candidates’ willingness to put their political capital on the line for the Crenshaw community is: where do they stand on the 11-block Park Mesa Heights tunnel? We know that MTA has the resources today to underground the line from 48th – 59th Street. The question is who is actually willing to fight to secure those resources for the Crenshaw corridor? On this matter there are distinct differences between Garcetti and Greuel.

“I commit to…[c]hampion the effort to ensure that the Crenshaw/LAX Line project includes a station at Leimert Park Village and an underground tunnel along Crenshaw Boulevard from 48th Street to 59th Street.“

Greuel also commits to tackle the administrative hurdles to implement the tunnel:

“I commit to…[a]s soon as possible upon taking office as Mayor, direct staff to review the design options in the EIR/S as well as funding opportunities for undergrounding portions of the Crenshaw/LAX line, including the section of Crenshaw Blvd between 48th and 59th streets.”

Greuel’s strong written commitment to put political capital on the line and overcome the administrative obstacles to pursue the tunnel are the primary basis for her “B+” grade. She also presented very well in the meeting.

Garcetti Conditions His Support for the Tunnel with Opt-Out-Clauses

In statements at public forums Garcetti has said he supports “undergrounding the line.”

However, when we requested he commit to those statements in writing, Councilmember Garcetti added several conditions that he had never previously stated.

I have always supported under-grounding the line from 48th Street to 59th Street, and just as I have regarding the Leimert Park station, I have advocated for this throughout my campaign and as a longtime policy priority of my Council office. Under-grounding, however, is unfortunately not part of the current EIR. I will continue to advocate for under-grounding the line, and if elected will immediately confer with Supervisor Mark Ridley-Thomas and carefully assess new options to see how we can achieve this goal without delaying Line construction or impacting the completion of the Leimert Park station.

As we articulated in our letter to Garcetti after our meeting, past support for the tunnel is significant, but the candidate’s current position is far more relevant. In this regard, Garcetti’s choice to condition his advocacy for the tunnel in such a manner is concerning. This is not a matter of simple semantics. Garcetti’s “conditions” read as “opt-out clauses” and are particularly troubling because they are identical to the unfounded excuses the community has received for nearly two years by Mayor Villaraigosa and other politicians for why they won’t move forward on the Park Mesa Heights tunnel.

Before we explain this further we must underscore that Garcetti was offered multiple opportunities to clarify his written commitment, but he has refused to do so. Should Garcetti modify his position we will be the first to report it. And if his clarifying written commitment is substantively different we will update his grade accordingly.

It is important to expand on Garcetti’s “conditions,” because: a) they are unfounded and you need to know exactly why they are unacceptable, lest another politician/MTA publicly repeat them; and b) they are largely the reason Garcetti received a grade of “C” on the tunnel. His meeting performance was also less than good. In summary, Garcetti’s statement pits the Leimert Park station against the Park Mesa Heights tunnel and makes delay appear as a valid concern, when in fact this is solely an issue of political will – nothing else. 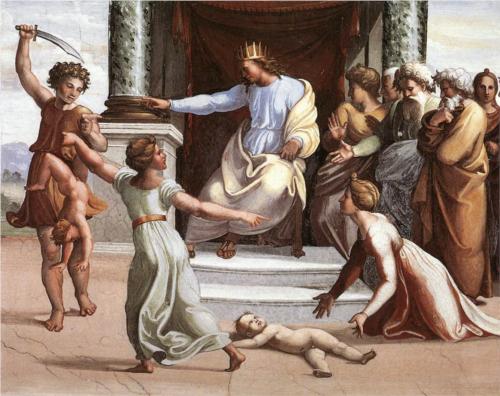 Since the moment the May 2011 motion to fund both the Leimert Park Village station and Park Mesa Heights tunnel failed, MTA has sought to make it appear as though the community should be happy to receive just the Leimert Park station. Asking the Crenshaw community to accept either the destruction of the last black business corridor and imposition of a major safety hazard in front of community schools, or not having rail access to Southern California’s African-American cultural district is akin to asking the community to be happy to receive half a baby. This is not an either/or choice, and we have zealously made this point in our advocacy over the past 2 years. This is a matter of ensuring that after decades of taking South L.A. tax dollars that MTA finally builds a rail project for a South L.A. community, instead of simply through a South L.A. community.

As we’ve seen repeatedly, this is not a matter of resources, as Villaraigosa/MTA proposed a $90 billion sales tax increase on last November’s ballot (Measure J) that didn’t have a penny for the Park Mesa Heights tunnel, Leimert Park Village station or any rail project improvement or extension in any part of South Los Angeles. And MTA is at it again, proposing to bond against $10.2 billion in future sales tax revenue to accelerate transit and highway construction projects in every part of the county EXCEPT South Los Angeles. 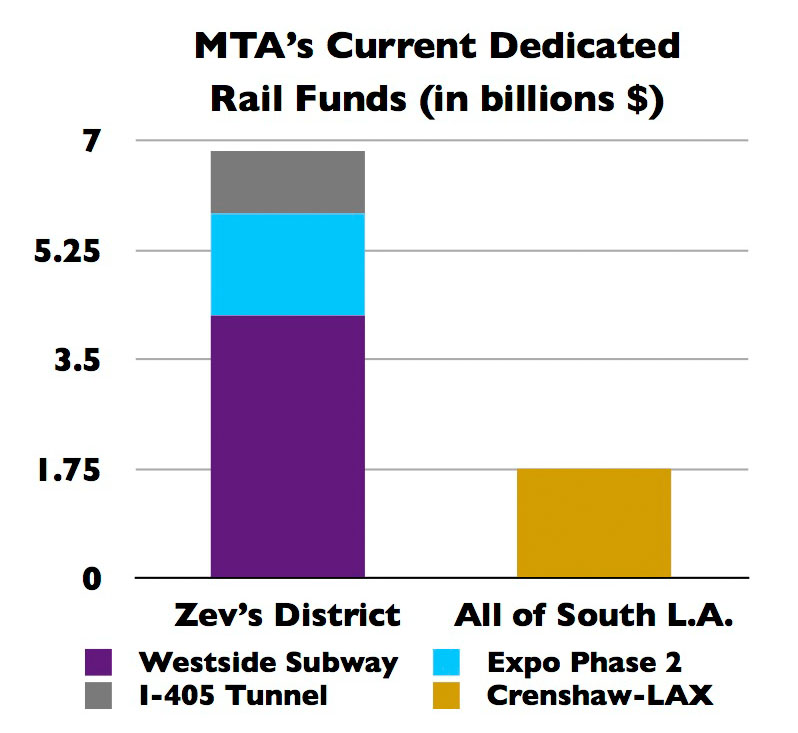 Furthermore, there is the context of pitting the station against the tunnel in the overall transportation decisions that have been made by the MTA. There is just one South LA rail project to be funded by MTA’s 30-year expansion plan (the Crenshaw-LAX Line), at an investment total of $1.75 billion. Comparatively, in Supervisor Zev Yaroslavsky’s district there are three: the Wilshire subway extension, Sepulveda Pass rail tunnel, and Expo Phase 2 to Santa Monica, which the MTA board has collectively dedicated nearly $7 billion in taxpayer funds towards building. (The three projects will collectively cost billions more).

We are remaining consistent with the position we took on Measure J: if South L.A. residents are going to be asked to pay additional taxes to improve and expedite tens of billions of transit and highway projects in every other part of the county, then at a minimum Crenshaw should receive an 11-block tunnel and station at Leimert Park Village.

2. This is a Matter of Political Will – Nothing Else

Given that sufficient resources exist today, and more are being sought in the future, it is clear that the only thing lacking in the effort for a Park Mesa Heights tunnel is political will. No other person on the 13-member MTA board controls 4 votes, not Zev Yaroslavsky, not Mark Ridley-Thomas, no one. In fact, in the 7 years that we have been monitoring the agency we can recall only once that the Mayor’s block was out-voted. Effectively, as goes the Mayor’s block so goes the board. The community expected Villaraigosa to stand with it and champion the efforts for a Leimert Park station and Park Mesa Heights tunnel, and we were disappointed when he did not. They expect the next Mayor to not make the same mistake.

Changing the rail project from street-level to underground for 11-blocks would modify less than 20% of the project’s length. The remaining 80% of the line could proceed simultaneous to the administrative and design process necessary to implement the tunnel in Park Mesa Heights. And the bulk of time for that administrative process (completing a modified environmental study for the 11-block tunnel) would take just 6 months. We must also point out that this environmental study could have been concluded a long time ago if MTA had begun the process back when we first publicly requested it in January of 2012. Furthermore, MTA staff has delayed this project multiple times for reasons that have nothing to do with changing the street-level segment in Park Mesa Heights to underground. Beginning construction in some portions of the project, and delivering the project somewhat later to save lives and save the last black business corridor is entirely rational and overwhelmingly supported by the community.