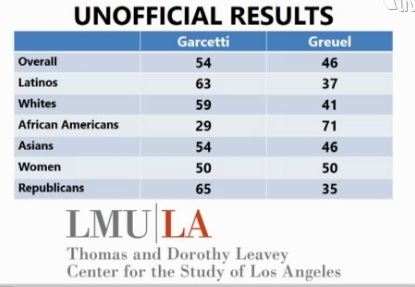 Unofficial results of the exit poll conducted by Loyola Marymount University’s Thomas and Dorothy Leavey Center for the Study of Los Angeles show that Mayor-elect Eric Garcetti won or tied every political constituency group, except African-Americans. Black voters selected Controller Wendy Greuel over Garcetti by a large margin of 71%-29%. With the Crenshaw Line contract award and Leimert Park Village decision currently scheduled for June 27, three days before he takes office, and closing briefs in the Crenshaw Subway Coalition’s lawsuit against MTA due his second day of office, July 2, one of Garcetti’s first big decisions directly affects the group his campaign had the most trouble earning support – the black community.

The Crenshaw Subway Coalition has led the advocacy efforts for a Leimert Park Village station and 11-block Crenshaw Blvd tunnel on the Crenshaw-LAX Rail Line. In May of 2011, in an amazing show of unity, all local black elected officials, joined with over 600 black community leaders to support a motion to fund a Leimert Park Village station and 11-block tunnel on Crenshaw Blvd. on the rail project. The community was palpably infuriated when Villaraigosa, who as mayor controls 4 of the 13 seats on the MTA board, used his 4 votes to kill the motion. The motion lost by exactly 4 votes. It is a decision that forever tarnished Villaraigosa’s legacy in the black community.

The Mayor-elect needs to say, “My four votes are for funding the 11-block tunnel and station,” so the Villaraigosa plan doesn’t become the Garcetti plan. It is far less bold and far less expensive than many of the other items on his transportation agenda (click on “Transportation”), like building the I-405 rail tunnel 15 years sooner than planned or another $90 billion-plus transportation ballot measure.

For the past 8 months, questions about the 11-block tunnel were asked of candidates in nearly every mayoral debate in South L.A. Our Coalition also privately met with both Mayoral candidates and issued a scorecard that rated Garcetti and Greuel on the station and tunnel. Both received “A-” on the Leimert Park station. But since the MTA is currently scheduled to decide the fate of the station at their June 27 board meeting, before the next mayor takes office, we suggested the candidates’ positions on the tunnel were more reflective of their willingness to put their political capital on the line for the Crenshaw community. On that front Garcetti only received a “C,” in part for not making written commitments as strong as his verbal statements.

In his written statement, Mayor-elect Garcetti pledged to add a South LA representative and transit rider to the MTA board as his appointees, and that is good.

But if Garcetti continues the Villaraigosa street-level plan that would destroy L.A.’s last black business corridor, even strong appointments would be quickly forgotten.

The current MTA/Villaraigosa street-level plan would remove over 308 parking spaces, turn Crenshaw Blvd into a 4-5 year construction zone, chop down all the mature median trees, erect prison-like fences along the corridor, close several streets and left turns, and impose a severe safety hazard with 225-ton trains operating at 35 mph down the boulevard right in front of community schools. The Coalition asserts that the street-level plan would irreparably harm L.A.’s last black business corridor, jeopardize community economic revitalization plans that are decades in the making and imperil the lives of schoolchildren.

Will Garcetti live up to his campaign promises of change, or will it be more of the same the black community received from Villaraigosa? His early decisions on the Crenshaw Line will help answer that question.