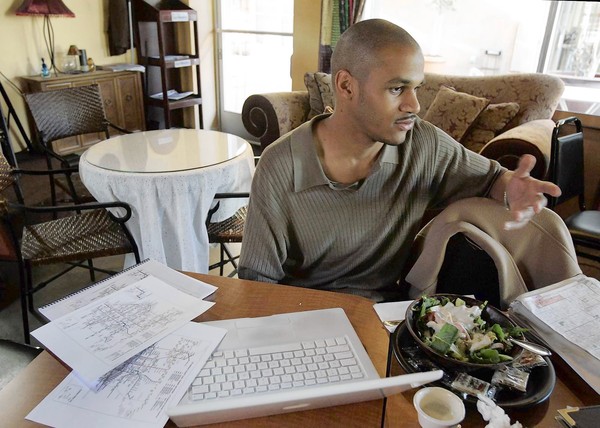 South LA Needs to Think Like Westside on Subway

Transit activist Damien Goodmon says the community needs to hire good, tough lawyers to take on the MTA and get what it wants. ‘They sue a lot on the Westside,’ he says.

Dressed smartly in an Oxford shirt and jeans, a PowerPoint presentation on the screen behind him, Damien Goodmon was standing with two feet firmly in South L.A. But he was asking his audience to think, for a moment, as if they were somewhere else.

“Let’s be honest,” he said to a group of about 50 activists and neighborhood residents gathered in a Crenshaw Boulevard meeting room. “What we’re doing here is kind of foreign to South L.A.”

Goodmon and his Crenshaw Subway Coalition are in a fight with the board of the Metropolitan Transportation Authority over exactly how the new Crenshaw light-rail line will proceed through South L.A. on its way to Los Angeles International Airport.

The coalition wants the line underground at a key Crenshaw Boulevard intersection and a station at Leimert Park Village.

Most of the communities the Crenshaw line would pass through have black majorities and, not surprisingly, the coalition’s demands are backed by a united front of L.A.’s black political leaders.

“People who’ve been enemies for 20 years are working together on this,” one South L.A. politico told me.

But on May 26, Mayor Antonio Villaraigosa and his allies on the MTA board declined to vote for the plan that black L.A. wanted.

South L.A. has been, generally speaking, a big supporter of the mayor’s public transit push. The future of black L.A. is tied to the future of the Crenshaw Boulevard corridor, the coalition has said, and now people there feel betrayed and insulted.

“Villaraigosa killed what legacy he had in our community,” Anthony Asadullah Samad wrote on the Urban Issues Forum blog. “Not that he really cared. Otherwise, he would take a chance and bet on black, like black bet on him.”

On Monday, Goodmon told his small but influential audience that the only way to reach their goal was to stop playing nice.

They needed to hire lawyers, he said. Good, tenacious lawyers.

“Why a lawsuit?” Goodmon asked rhetorically. “Because we’re defenseless without one.”

In certain parts of the metropolis, of course, bringing attorneys to a transit fight is old hat. In South Pasadena, Culver City and other communities that are better off than the Crenshaw District, people do it all the time. “They sue a lot on the Westside,” Goodmon said.

But in that meeting room, not far from the corner of Crenshaw and Slauson, the idea of a group of residents going to court against the MTA behemoth was new and unfamiliar to many. So Goodmon prepared an hourlong presentation as to why and how it could be done.

For starters, Goodmon told them, they needed to raise some serious cash.

“Black power does not come from putting a dollar in a can,” he said. He gave an estimate of what a good legal team might cost: a minimum of $15,000. The figure floated around the room — no one, it seemed, thought it was beyond their ability.

“I never thought we’d have to go to court,” said Jackie Ryan, the owner of Zambezi Bazaar in Leimert Park. “This was brought to us by the Metro board. The MTA smacked down our community, in my opinion.”

I’m completely with the activists on their fight for a Leimert Park station — not building a station at that locus of L.A. African American culture would be a travesty. But I’m not entirely convinced of the need to bury the light-rail line along the entire Crenshaw Boulevard section of the route.

At the same time, I’m not naive enough to believe that the MTA board is a body of disinterested civic leaders who are going to look at the feasibility studies and the available money, and make an impartial and disinterested decision.

You can’t spend billions of dollars in public funds without politics getting involved. Power relationships determine the shape of big projects: that’s why the trains that are already running go underground on Wilshire Boulevard and above ground in Watts.

“I was at a play date with my kids and one of the moms brought it up,” said Melina Abdullah, a Cal State L.A. professor who attended Monday’s meeting — her first. “Then I got an email that said this was an ‘emergency meeting.’ That caught my attention.”

The “emergency” was a scheduled Aug. 4 final MTA vote on the project. Hours before Monday’s Crenshaw community meeting, however, the vote was pushed to September.

“I’ve been calling the MTA for days about it,” Goodmon said.

Goodmon, 29, is a former high school football star who became a bit of a transit geek after attending a community meeting in 2006. He thinks South L.A. got snookered in the two big light-rail projects to go through the area — the soon-to-open Expo Line, and the Blue Line, whose above-ground trains have struck and killed more than 100 people since opening in 1990.

Now Goodmon has become fluent in what he calls “Metrospeak.” Wednesday found him at another MTA meeting, angry about a plan to divert $170 million in funds to a rail yard for the Westside Expo Phase 2 project that will stretch from Culver City to Santa Monica.

When Crenshaw subway advocates asked for a similar reallocation of funds, he said, it was denied.

“When it’s for South L.A, they call it ‘a raid, a stickup,’ ” Goodmon said at Monday’s meeting. “But when it’s for the mayor’s pet project, it’s called ‘borrowing.’ ”

A little later, I watched as people started writing checks. They passed them forward, along with $20 bills and forms for recurring donations. “Just like what Obama did,” one resident said.

Soon, perhaps, they’ll have a lawyer or two on their side.