A Brief Update on Our Struggle & The NY Times Article 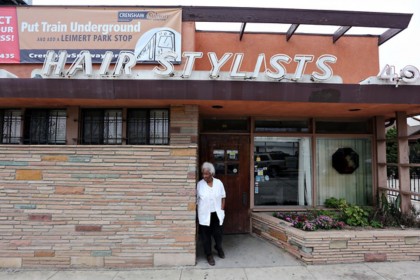 Tomorrow morning the struggle of the Crenshaw Subway Coalition will hit newsstands across the world. In addition to posting the New York Times article in it’s entirety below, here are a few critical updates about the status of our effort to make MTA underground the rail line on Crenshaw Blvd to protect and preserve the future of Los Angeles’ last black business corridor, and build a stop at Leimert Park Village to serve the center of African-American culture in Southern California.

The three primary focuses of our organization currently are our legal challenge, our efforts to pass The People’s Motion, and ensuring that the Crenshaw-LAX Line issue is a key barometer for evaluating the 2013 L.A. Mayoral candidates in South L.A. and beyond.

Our organization remains engaged in a well-grounded legal battle against the MTA and Federal Transit Administration that challenges the approvals granted by the agencies to build the Crenshaw-LAX light rail line. Our lawsuit states that by building a train line to run at street-level down Crenshaw Blvd and without a stop at Leimert Park Village the MTA has violated over a dozen state and federal environmental laws and the California civil rights law. If the federal judge who will hear our case in March of 2013 finds that MTA has violated just one of the laws, it would very likely halt construction of the line.

2) Passing The People’s Motion at the MTA Board

Currently, the ONLY major impediment to permitting the four joint ventures that are seeking the billion-dollar Crenshaw-LAX light rail contract to submit a supplemental bid that includes a Crenshaw-LAX project with a tunnel the entirety of Crenshaw Blvd and station at Leimert Park Village is the MTA board. The MTA board currently refuses to even ask the contractors to bid the project with the tunnel. Until a bid is received the true cost of the tunnel cannot be known. However, preliminary analysis by several contractors indicate the additional cost will be minimal or could be absorbed within the existing project budget. We remain committed to addressing this major administrative hurdle by advocating for passage of The People’s Motion by the MTA board.

3) Making This Issue a Key Barometer in the Mayoral Discussion

Placing the Crenshaw-LAX line underground for 11-blocks on Crenshaw Blvd is simply a matter of political will NOT resources. MTA has always had the money, but Mayor Antonio Villaraigosa has lacked the desire to direct it towards the Crenshaw-LAX Rail Line. We believe that if the current mayor is uninterested in protecting Los Angeles’ last black business corridor, the South LA black community remains committed to ensuring the next mayor will be.

A few months ago we very quietly convened an invitation-only meeting that was characterized by several attendees as the most powerful assemblage of black Los Angeles leaders in a generation:

This meeting had about 50 key stakeholders that get it done in every industry and every generation. I haven’t been a part of such a meeting since the early 90s. The young lion who called the meeting made his appeal and the community bought in solid. A community that rarely agrees on anything came away agreeing on three things:

1) Crenshaw Blvd. will not have a rail line running up the middle of it – killing off what little commerce the community has left;

2) the community will vote solidly for the Mayoral candidate that delivers the Leimert Park stop and the underground tunnel – and that person will find the money for it – if they want to be Mayor;

3) the Black Community is prepared to vote against Measure J if it can’t get what it wants on Crenshaw.

Building the powerful coalition of black leaders that helped defeat Measure J was a direct product of the collective understanding and commitments made at the leadership meeting. Fresh off the Measure J battlefield, we will continue to collaborate with community leaders to strategically engage current and future decision-makers on this issue.

LOS ANGELES — The story of major transit projects in the 20th century here was the story of black neighborhoods carved into pieces. One freeway after another forced families from their homes in South Los Angeles, the core of the region’s black community. Walls of concrete were erected through their neighborhoods, which they said cut them off from wealthier parts of the city.

The Crenshaw rail line was supposed to be different. The line, a crucial link in a planned rail network that will span Los Angeles County, promised to right that historical wrong by connecting South Los Angeles to the city’s business hubs: downtown, the airport and Hollywood.

Instead, the Crenshaw line threatens to become yet another insult to South Los Angeles and a burden for businesses, some residents and community activists have said.

The Leimert Park neighborhood, the heart of black culture here, may be left without a stop on the rail line, a victim of limited money. And the train will run at street level through part of the area, which business owners fear will cut them off from their customers during years of construction.

The prospect that the train will bypass the neighborhood has stoked distrust among South Los Angeles residents who feel that they are being shortchanged, as power brokers try to save money for other projects in wealthier parts of the city.

Tonya Anthony’s family has owned and operated a hair salon on Crenshaw Boulevard since 1959. She was initially excited about the Crenshaw line. But once she learned that there would be no stop in Leimert Park, a few blocks from her shop, and that construction would take away half of the parking her customers used, she worried that the train might drive the salon out of business.

“Leimert Park is one of the major cultural areas in the city,” Ms. Anthony, 44, said. “For traffic to be diverted past it, I think, would be very detrimental to this area and the businesses here.”

Tom Bradley, this city’s first and only black mayor, was also the mayor who brought modern rail lines to Los Angeles. Before serving as mayor from 1973 to 1993, he lived in Leimert Park. And, for some, the Crenshaw line, which will cover 8.5 miles through South Los Angeles to the airport, has become part of an effort to extend his legacy.

Mark Ridley-Thomas, a Los Angeles County supervisor who represents South Los Angeles, put forward a plan last year to allocate money for a Leimert Park stop and to keep the line underground along Crenshaw Boulevard. The city’s black political establishment — religious and business leaders and elected officials who have often clashed on other issues — lined up behind the effort.

“It was a salute to Tom Bradley, who said this was his vision for his city,” Mr. Ridley-Thomas said. He added that the Crenshaw line and a Leimert Park stop had become “emblematic of a struggle for progress.”

Mayor Antonio Villaraigosa, the city’s first Latino mayor, has also positioned himself as a successor to Mr. Bradley’s transit legacy: the rail lines that will span Los Angeles County in the coming decades will be a major piece of his own legacy, after he leaves office next year because of term limits.

Yet Mr. Villaraigosa and his allies blocked Mr. Ridley-Thomas’s plan. Instead, a Leimert Park stop will be included only if contractors can squeeze it within the existing budget, and the Crenshaw line will run at street level for part of its trip through the area.

Like just about everyone else, Mr. Villaraigosa agrees that Leimert Park, home to cultural festivals, jazz clubs and a host of black-owned businesses, deserves its own stop. Contractors will submit their proposals for the project within a few weeks, and the mayor said he was “fairly confident” that a Leimert Park stop could be done within the $1.8 billion budget.

But Mr. Villaraigosa also emphasized the benefits that the rail network — including a recently constructed light-rail line that carries passengers through the northern parts of South Los Angeles — would offer the area even if a Leimert Park stop was not built. He also noted his efforts to expand the Crenshaw line, which was originally designed as a bus line with a fraction of the money it now has.

“All of that happened because I drove it,” he said. “This was a busway before I made it into a light rail.”

Still, some Leimert Park residents remain convinced that the rail line has been nickel-and-dimed to save money for other projects in wealthier parts of the city, like the “Subway to the Sea,” which will extend the subway line from downtown through affluent communities in West Los Angeles. The budget for that project stretches to an estimated $6.3 billion, and the entire line will run underground, sparing businesses from surface-level construction that could drive away customers.

“In this community, we don’t have money,” said Theodore Thomas, the president of the Community Council in the Parker Mesa neighborhood, where the Crenshaw line will run at street level. “The majority of people think we’re a pass-through on the way downtown.”

Lisa Schweitzer, a professor at the Sol Price School of Public Policy at the University of Southern California who studies social justice and transport, said that the congested corridor on the West Side was the best place in Los Angeles for a subway line, while Crenshaw Boulevard was better suited for an above-ground light-rail line, which is less expensive to build but carries fewer people.
Crenshaw Boulevard was the site of a streetcar line, before that rail system was ripped out more than half a century ago.
But Dr. Schweitzer said she understood the frustration that residents and small-business owners along Crenshaw Boulevard had expressed.

Tavis Smiley, the television and radio broadcaster, has lived and worked in Leimert Park since the 1980s, when he started as an intern for Mr. Bradley.

“This is an old story,” he said. “I detest when government gives short shrift to people of color. If they don’t figure out a way to make sure this stop is included, there’s going to be outrage in this community.”