Don’t Let Us Get Jacked with Measure J – Vote NO! 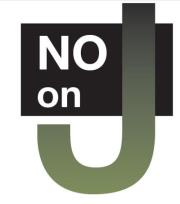 Supporters of the November ballot measure Measure J, which is led by L.A. Mayor Antonio Villaraigosa and others who have ignored the requests of our community with respect to transportation, have reached out to African-American opinion leaders. They are in search of black faces to support their unjust, unfair, and unacceptable proposed sales tax increase that provides NOT A PENNY for our community to address the outstanding issues on the Crenshaw-LAX Rail Line, which is soon to begin construction.

The proposed countywide sales tax increase Measure J will tax South LA communities until 2069. It is projected to generate an additional $90 billion dollars for MTA, on top of the $40 billion already dedicated to transit expansion through Measure R, which was passed in 2008.

There are many arguments for opposing Measure J, including the insufficiency of the projects to meet our region’s transportation needs for the next 57 years, the inability of the MTA to manage so many projects simultaneously, the lack of sufficient funding to operate the projects and accompanying bus service that is constantly being cut, and the simple truth that you cannot trust Mayor Antonio Villaraigosa and this MTA board.

For me, a left-of-center voter, who almost always votes for infrastructure improvements, I simply can’t get past the inequity of taxing Black people, Brown people and poor people in our community to give MTA a $90 billion check, while not receiving a single penny in return to address the issues on the Crenshaw-LAX Line.

$90 BILLION AND NOT A PENNY FOR CRENSHAW!

The highest estimate of the additional cost to add a rail station at Leimert Park Village and underground the Crenshaw-LAX Rail Line for just 11 blocks on Crenshaw Blvd is less than 1/2 of 1% of $90 billion. Let that sink in: the MTA/Villaraigosa want us and our great grandchildren to sacrifice, and they don’t even want to return less than 1/2 of 1% of the proceeds to address the Crenshaw Line issues.

Where I grew up the kids have a phrase for this type of action: “STRAIGHT GANGSTA!”

Said simply, Villaraigosa is trying to Jack us with Measure J.

HISTORY PROVES IT IS WHO THEY ARE.

For years we have witnessed this level of arrogance and disrespect of our community by the Villaraigosa-controlled MTA. Many of you witnessed it personally just a little over a year ago when over 600 of us packed that board room and asked MTA to appropriate the money for a station at our African-American cultural center and to underground the line for 11 blocks on Crenshaw Blvd to preserve our community, defend our children’s lives and position us for an economic revival that we have awaited for generations.

It is instructive to remember Villaraigosa and the MTA’s board response to that level of unity unseen in our community in my young lifetime. It’s a familiar cry whenever we attempt to demand adequate return for our investments: “We don’t have the money!”

Even though South LA voters overwhelmingly helped pass the first sales tax increase for MTA that generated $40 billion (Measure R), with a straight face and a crooked smile Villaraigosa said to us they didn’t have the money. And as Mayor Villaraigosa with his close friend in Sacramento, Assemblymember Mike Feurer (who will be on the LA City ballot for City Attorney in March 2013), composed Measure J they still “couldn’t find the money” for Crenshaw.

OUR COMMUNITY HAS HAD ENOUGH. WE ARE TOO SMART TO BE PLAYED FOR A FOOL.

Before we consider sacrificing $90 billion of our hard earned tax dollars to MTA, there must be a change in the manner that the MTA and this Mayor considers our community. That change will NOT occur before election day. Accordingly, we do not want, and we cannot trust, this cast to make decisions about how to spend $90 billion of transportation funds for the next 57 years. They have promised to leave us out, and should Measure J pass we should expect them to keep their word.