Special Screening of Leimert Park: The Story of a Village in South Central Los Angeles 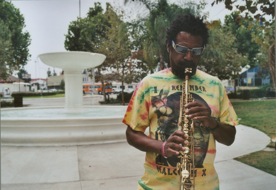 The full announcement is below:

Black Talkies On Parade presents a very special afternoon celebrating one of L.A.’s most colorful communities. This month the Mayme A. Clayton Library and Museum will be screening the documentary film Leimert Park: The Story of a Village in South Los Angeles directed by Jeannette Lindsay. The film explores the neighborhood’s vibrant culture with thriving art, music, and poetry scenes. After the film there will be a panel discussion and Q&A with filmmakers Jeannette Lindsay, Zan Zetina, and Steve Isadori. Other featured guest will be author Cynthia E. Exum and co-author Maty Guiza-Leimert who together wrote a comprehensive book detailing the history of Leimert Park since it’s conception in 1927 by Walter H. Leimert Sr. Autographed copies of Images of America: Leimert Park will be made available during the event or advance copies may be purchased at Eso Won Book Store located in Leimert Park, 4327 Degnan Blvd, LA., CA 90008, (323) 290-1048. Join MCLM and share your own stories of L.A.’s one of a kind neighborhood, Leimert Park!