Op-Ed: We Go to Court in Response to Villaraigosa’s Betrayal

Our op-ed on the betrayal of L.A. Mayor Antonio Villaraigosa of the Crenshaw community and the systemic disinvestment of South L.A. appears in Intersections South LA and CityWatch. The full op-ed is below. 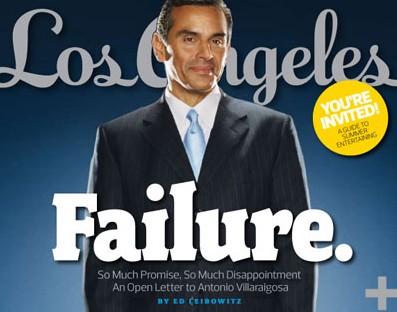 On October 21st, our coalition of Crenshaw corridor residents, merchants and stakeholder groups marched into court to file a lawsuit against the Los Angeles County MTA for violating the laws of the state of California when they approved the faulty Crenshaw-LAX Light Rail environmental document at their September 22nd board meeting. Our 200-paragraph lawsuit specifies how the currently proposed MTA plan, which lacks a Leimert Park Village station and features a destructive, disruptive and dangerous street-level segment on Crenshaw Blvd from 48th to 59th Street, violates our state’s civil rights act and eleven major provisions of our state’s environmental law. The full lawsuit can be read here.

Citizens suing their own government is a bold and daunting undertaking. But the Antonio Villaraigosa-led MTA board has left us with no other alternative.

For four long years the Crenshaw Subway Coalition and Fix Expo Campaign have been clear: we want the Crenshaw-LAX rail line, we just want it built right. In 2007, we began singing, eventually creating a chorus that was reflected in the over 600 citizens who flooded the MTA headquarters in May of this year to request that line be built with a station at Leimert Park Village and underground for the last mile still proposed at street-level on Crenshaw Blvd. Every major South L.A. community, clergy, labor and business group stands united in their request that the train not impose on fragile Crenshaw Blvd the safety hazards, traffic congestion and other environmental disruptions that accompanies street-level rail. 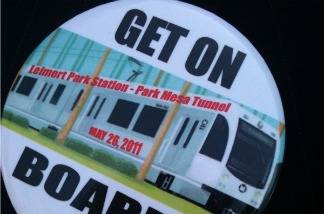 Simultaneously, the Crenshaw Subway Coalition has been advocating for the project to be adequately funded to make such happen. Yet, at every turn we’ve been met with forceful opposition from the MTA staff and the board – most prominently Mayor Villaraigosa.

The MTA response is always, “There’s no money.” While Villaraigosa and the rest of the Westside politicians who control the MTA board have a blank check mindset for the Wilshire subway extension, which the Mayor considers a personal legacy project, we on Crenshaw have been met with a tight-belt mentality. Even after receiving a $546 million federal loan for the Crenshaw-LAX Line, MTA decision-makers stated there still was no money for a Leimert Park Village station or tunnel from 48th to 59th – that the loan would be used to help build other projects more quickly, not improve Crenshaw-LAX!

These types of discrepancies and actions are nothing new to those of us in South L.A. The historic disinvestment and lack of return of our tax dollars is as old as the call made by those who perpetrate and benefit from these policies that we “shouldn’t bring race into the discussion.”

We should, so they say, ignore that Crenshaw is the only remaining corridor with a significant concentration of black-owned businesses in all of the Western United States and 5-6 long years of street-level construction from 48th to 59th Streets, coupled with the long-term environmental changes, will lead to its destruction.

We should, so they say, not consider this yet another ugly chapter in the history of transportation decisions that have harmed many communities, but undoubtedly have disproportionately harmed communities of color. 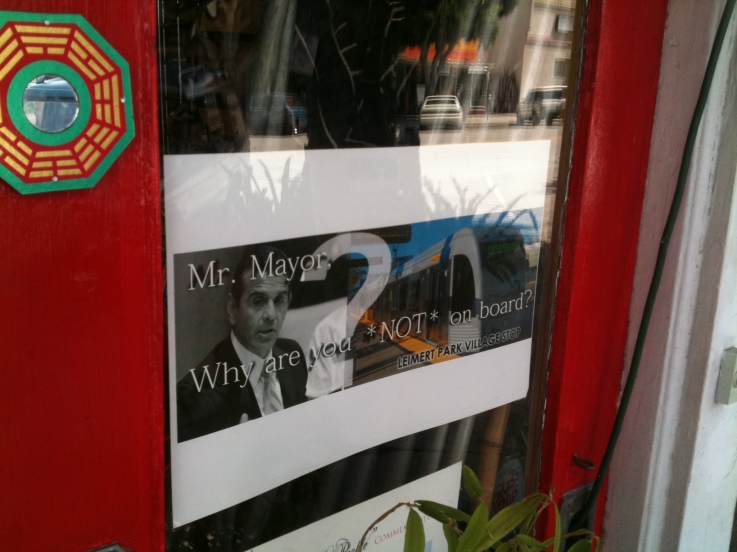 There are many causes for the current Crenshaw-LAX predicament. Among them is that many on the MTA board, think that Crenshaw Blvd is and always will be a ghetto. They see no harm in taking half the businesses’ parking spaces (308 in total from 48th to 59th), and cutting down the mature median trees to replace them with industrial utility lines and prison-like fences. They see no consequence in closing off streets, eliminating left-turns, getting rid of the frontage roads and pushing the toxic fumes of vehicles 18-feet closer to the day care centers and schools that line the alignment.

“Its just Crenshaw after all,” is their attitude.

What they don’t recognize is the decades-long work the community has done to position Crenshaw for its rebirth in spite of constant political and bureaucratic challenges and neglect. Residents and business owners came together to push for and pass a specific plan for the Crenshaw corridor that prohibits uses like liquor stores and motels, and guides future development in a direction similar to Downtown Culver City.

What they don’t respect is the dozens of community visioning processes, feasibility studies, and resident-led programs that have incrementally sought to transform Crenshaw’s Hyde Park into a community of choice, and Leimert Park Village into an even more thriving cultural center.

They don’t view Crenshaw Blvd’s unique cultural and ethnic character and it’s positioning in the middle of an international triangle of commerce (LAX, Hollywood and Downtown L.A.) as an asset that can be leveraged for both local and regional economic prosperity.

They definitely don’t envision Crenshaw Blvd the same way decision-makers viewed West Hollywood’s Santa Monica Blvd 15 years ago. Today MTA studies state that the only possible rail option for Santa Monica Blvd is an underground alignment. Ripping out trees and landscaping to widen the street’s roadway, or taking away half the businesses’ parking spaces to fit street-level rail or elevated rail columns on a median once used by trains are not an option on Santa Monica Blvd. Underground all the way is what they say at MTA when it comes to Santa Monica Blvd!

So while we have been forced to go to court like environmental groups and civil rights leaders before us to protect, preserve and enhance Crenshaw’s future, we recognize this is just another in a long unfortunate series of decisions, where the hopes and dreams of a community of color positioned for a revival are being stymied by politicians who benefit more from spending our tax dollars elsewhere, rather than adequately investing in our backyard.

The Crenshaw Subway Coalition will be hosting a community meeting on Monday, November 7 from 6-8 pm at the DWP Crenshaw Office (4030 Crenshaw Blvd, Los Angeles, CA 90008) to discuss their lawsuit and reveal the most intriguing aspect of their strategy to achieve a Leimert Park Village station and tunnel from 48th to 59th Street.