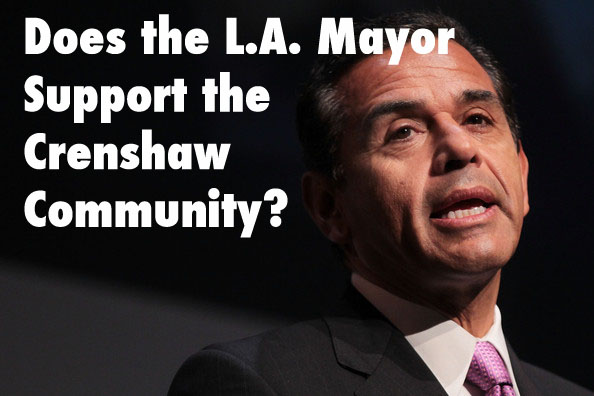 At Thursday morning’s MTA meeting, the board members will vote on a motion by Supervisor Mark Ridley-Thomas to underground the entirety of the Crenshaw Blvd portion of the Crenshaw-LAX Light Rail Line and return the Leimert Park Village station to the project. In addition to Supervisor Ridley-Thomas, Supervisor Mike Antonovich openly supports the motion, and a third board member has expressed their support privately. With 7 votes needed for passage, all eyes are on L.A. Mayor Antonio Villaraigosa, who controls 4 votes on the 13-member MTA Board. The $1.7 billion light rail line is scheduled to begin construction in 2012.

“The Mayor has an important decision to make and it’s about his legacy,” said Jackie Ryan, past president of the Leimert Park Village Merchants Association. “Does he want to be forever known as the Mayor who voted to put the nail in the coffin of the last African-American business corridor in Los Angeles, or the Mayor who provided for Crenshaw the greatest economic revitalization opportunity ever.”

2 of the 3 miles of the line that travels on Crenshaw Blvd is to be built underground. But “the final mile” in Park Mesa Heights from 48th to 59th Street is currently designed at street-level right next to View Park Prep School and a block away from Crenshaw H.S.

MTA’s street-level plan in Park Mesa Heights would also have severe impacts to future development and current businesses, the majority of which are African-American operated. The street-level plan would require: the removal of nearly half the parking on Crenshaw Blvd, the prohibition of left turns at streets like 54th, trains to cross every 2 ½ minutes across busy intersections like Slauson Avenue, which is currently operating at the worst possible level of congestion (LOS F), and 4-5 long years of disruptive street-level construction. During street-level construction on 3rd Street on the recently completed Gold Line Eastside Extension, 90% of the businesses were put in the red, and multiple businesses were forced to close their doors.

“The Mayor needs to get on board and bring his block of votes with him,” said Damien Goodmon, Chair of Crenshaw Subway Coalition. “It is what we as a community group have been requesting and organizing towards for 4 years. Every other politician who represents South L.A. has stepped up in full support of the Ridley-Thomas motion.”

“South L.A.’s political versions of the Hatfields and the McCoys are united on this issue,” said Winnifred Jackson of the Hyde Park Organization Partnership for Empowerment (HOPE), a community-based group in the Hyde Park community that would be impacted by the street-level plan. “It’s a level of political unity not seen in generations. If Antonio Villaraigosa turns his back on us now, when the money has been identified, and as a consequence MTA builds their business-killing street-level plan through Park Mesa Heights, he can look forward to his name being mentioned right next to other despised officials like former LAPD Chief William Parker. We won’t ever forget it.”

A report released last Thursday by the MTA staff identified $2 billion dollars in resources that can be used to fund the Ridley-Thomas motion without compromising the delivery of any Measure R project. The cost of the changes to the Crenshaw-LAX Line project are projected between $339-400 million.

“We’ve been door knocking, phone banking, holding community meetings, getting petitions signed and writing letters,” said Goodmon. “We’ll be at Thursday’s board meeting by the hundreds to support the Ridley-Thomas motion. We applaud the Supervisor for stepping up to the plate to represent the Crenshaw community’s interest and the interest of transit users throughout the region who value safe and fast rail transportation. Mayor Villaraigosa needs to do the same.”